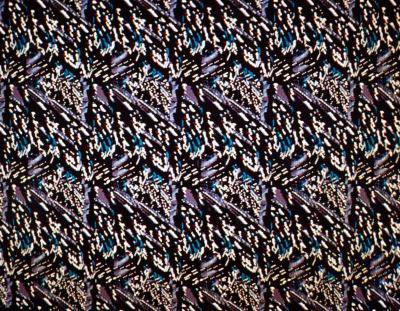 Tim Maul, painter, photographer, performance artist and master of understatement writes, 'My work squarely remains in that 'hot potato' area between art and photography.' The idea of a 'square potato' is a key to the conundrum of Maul's Cibachrome photographs where out of scale and fragmented household items are cornered by the frame. Looking at slides of Maul's work is like looking at movie footage with the plot and movement edited out. Only the bluntness of the object remains, little monuments to traditions in art from surrealism to pop. The images, of an iron reflecting a hot spot of light, or two fuses paired like eyeballs in the corner of a white wall with shadows, or the lower angle of an elaborate frame titled, Dead Painting, as well as the bared switch box against the art nouveau wallpaper, reproduced on the cover of this issue of the CONTACT SHEET, set up a volley of meaning and function. The deadpan weight of Maul's subjects on the self-reflective glassy surface of Cibachrome materials strike with refined humor at the artificial division of art from everyday life.

The meditative quality of Maul's object photographs is repeated in the process of his learning to use the AMIGA 2000 computer during his residency at Light Work this past July. Using one photograph, of construction workers standing by as Richard Serra's celebrated Tilted Arc is dismantled, Maul dissected and explored fragments of the digitized photograph through series of selections and permutations. The final prints in 'The 4 Men Watching' series were photographed off the monitor and enlarged to 16 x 20'. The group of images isolate details, such as a man's shoulder or repeat microscopic pieces to create patterns as in 'Brilliant Wallpaper'. A self proclaimed product and critic of television culture, Maul's investigation into new ways of bending the media to create meaningful icons blends art with ordinary experience.

An unconscious image comes into consciousness either directly (i.e., literally) or indirectly (symbolized or suggested) in the form of a dream, idea, or premonition.

Falling in Love with Heavy Things originated from a collaboration between visual artist Tim Maul, musician Ben Neill, and dancer/choreographer Lisa Wheeler. The first manifestation of this project, inspired by Michelangelo Antonioni’s film Blow-Up, took the form of a live performance created by Maul, Neill, and Wheeler   entitled Smoke Against the Beat—a line from the film spoken by David Hemmings to Vanessa Redgrave. The performance, which premiered last year in New York at Wings Theater, was never intended by the artists to be a remake of Blow-Up, but rather a derivative work using images from the film, slide projections, movement, and original music  adapted in part from the film’s soundtrack. The CD-ROM which followed under the title Falling in Love With Heavy Things evolved out of the material created for the performance and original photographs created by Maul specifically for the work.

Antonioni’s film, the subject of countless reviews and critical writings, remains as enigmatic today as it did at its premiere in 1966. Even if our recollection of Blow-Up may be  sketchy, there are a number of images from the film that remain etched in our memory—the scene of Verushka being photographed by David Hemmings’s character who is perched on top of her, the image of a shirtless Vanessa Redgrave with her arms crossed over her chest, or perhaps a rare live performance in the film by the Yardbirds as Jeff Beck does his best Pete Townshend impersonation by smashing his guitar on stage. If we were to recount the plot of Blow-Up we might describe it as a tale about a successful, albeit frustrated, fashion photographer who accidentally discovers he was witness to a murder. However, in the film we never learn the identity of the victim or a reason for the murder. We are never given a reason to understand or even care about David Hemmings’s character who is an arrogant and abusive hedonist. In the end of the film Hemmings is left with nothing—his images revealing the murder have been stolen from his studio, the body of the corpse turns up missing from the park where he discovered it, and the phone number given to him by Redgrave’s character leads him nowhere—he stands in the park watching a group of mimes play an imaginary game of tennis with a invisible ball. Cut to a scene of a field of grass (the same shot from the film’s opening credits), and the film ends. It is the    questions that are left unanswered in the film which compel us to reexamine Blow-Up, searching for clues leading us to some kind of discovery or resolution.

Using images taken directly from the film Maul began to weave an alternative tale about a young artist who lives in a large city, perhaps New York, perhaps London. She is a painter but would rather be a photographer. The story unfolds in a non-linear sequence of smaller segments—each separated by the image of a tennis ball rolling across a field of grass, alluding to the final scene of Blow-Up. The character of the artist, portrayed by Lisa Wheeler, appears in two different personas throughout the work—wearing an exact reproduction of the sequined dress worn by Verushka in Blow-Up, and elsewhere dressed in a blue shirt and white jeans, identical to Hemmings’s wardrobe throughout the film. Stills taken from Blow-Up become backdrops for Falling in Love with Heavy Things. Other images from the film are manipulated and distorted in such a way as to appear to be original paintings and photographs created by the character of the artist in the CD-ROM.

Images from Blow-Up continually fade in and out of the storyline of the CD-ROM as if the film itself were being played out concurrently. A frame by frame analysis of Blow-Up might reveal most of the sources used in the CD-ROM, but for Maul it is more important that these references strike the viewer on a unconscious level. Along with stills from Blow-Up, Maul generated several new scenes with still and motion picture cameras, adding additional allusions to the film and the time period in which it was made. Formatting this work for playback on the computer allowed him to construct a narrative with no discernible beginning or end. But unlike other works created for CD-ROM, which function as games or data archives, this is a work meant for observation rather than interaction. Maul best described this piece as “a cinema daydream assembled from pictures, movement, sound, and text.” In thinking of the work as a dream or hallucination of the film Blow-Up, Maul has created a curious work that is as enigmatic as the source from which it is based.

Tim Maul lives in New York City and completed production of this     CD-ROM in March 1999.