Adrienne Salinger
Donna D (From the Series Teenagers and their Bedrooms), 1990 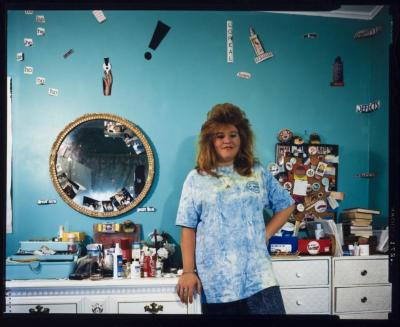 The 20 x 20 inch color prints by Salinger combine elements of sculpture, drawing and narrative form. Salinger works in her studio where she cuts out shapes from such prosaic materials as paper, corrugated cardboard, and foam rubber. The flat cartoon like characters are then animated by drawing with spray paint, acrylics, chalk and string. The scenarios are riddles of dimension where depth is not fixed but implied and framed by the photographic act.

Salinger is a Professor in Art Media Studies at Syracuse University. She received her B.A. in Journalism at the University of Oregon and an M.F.A. at the School of the Art Institute of Chicago.

Adrienne Salinger recently completed work on 'Teenagers and Their Bedrooms ' a photography and video installation project supported by Light Work with funds from the New York State Council on the Arts Sponsored Work Program. This 30x40 Ektacolor print titled Donna D. is one of the 25 large scale photographs Salinger produced for the project that explores the poignant and outrageous expression that teenagers exert over the first environment they are allowed to control, their bedrooms.

2002
'Salinger believes living with other people can compromise one's style, and her own style is absolutely uncompromised. She has lived all over the country, including California, Oregon, Seattle, Chicago, and Denver, and most recently sacrificed a comfortable tenured teaching position at Syracuse University, sold her house, and started a new life in Albuquerque. The risk was worth it; she's now an associate professor of photography at the University of New Mexico, which has one of the strongest programs for photography in the country.'