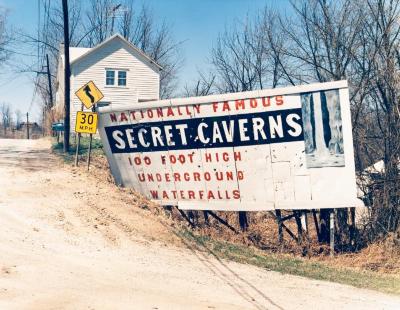 Interplay, The Visual/the Verbal, a series of color photographs by Ronald A. Wilcox was exhibited in the Light Work Gallery through October 15. Wilcox is a collector of outdoor signs and visual puns that he shoots on his long drives through Upstate New York. Along some of the old routes established in colonial days new and changing billboards are mixed with signs of ancient rural tourist attractions for which Walker Evans surely would have put on his brakes.

Billboards have played the subject and setting in many memorable photographs. Margaret Bourke White's picture, from the 1930's, of an unemployment line of black Americans in front of a larger than life illustration of a white family in a car advertises The American Way. The juxtaposition makes a clear statement about the ideals of mass culture versus real socio-economic conditions. In these post-modern times, messages and mediums are co-opted by both advertising and art with more subversive effect. Wilcox has reframed the accumulation of old and renewed roadside signs with results that beg new interpretations.

With tongue in cheek and the eye of a political satirist, Wilcox capitalizes on the irony of a Laundromat on the site of the first Women's Rights Convention held in Seneca Falls in 1848. The backyard issue of nuclear waste dumping is clearly expressed by an anonymous Chenango county citizen who may have consciously or not applied their message to the old Burma Shave model of a small billboard series. The photographers careful persistence in documenting and mounting the piece pays respect to environmental activism and effectively echoes the spirit and meaning of the message.

Ronald Wilcox is a resident of Oneonta, NY and while a member of the Community Darkrooms, printed the major part of this exhibit. The project was supported in part by a 1989 New York State Council on the Art Individual Artist Grant.