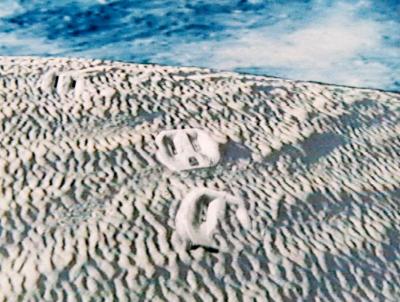 In 1908, Charles Dawson, English lawyer and amateur geologist, discovered the fragments of a fossilized human skull in Piltdown near Brighton in southern England. Three years later, additional bone fragments were discovered at the site, and in 1912 renowned anthropologist Dr. Smith Woodward discovered a lower jawbone believed to be part of the original skull. Experts found it difficult to assemble all of the pieces of this skull due to the damaged condition of the fragments, but the result proved to be of extraordinary archaeological significance.

The cranium of the specimen resembled basic Homo Sapiens, whereas the lower jaw was considerably more primitive, exhibiting ape-like characteristics. Estimated to be 500,000 years old, Eoanthropus Dawsoni ('Dawson's Dawn Man'), more commonly known as 'Piltdown Man,' became a key link in the evolution of modern humans. Piltdown Man baffled many archaeologists and anthropologists, and became the focus of nearly 300 scholarly theses. Considered to be the first and oldest Englishman, the artifact inspired the British government to declare the Piltdown site a national landmark.

In 1953, as scientific methods for dating archaeological artifacts improved, a fluorine test on the fragments of the Piltdown skull and the lower jaw revealed a startling discrepancy in age and origin between fragments. The lower jawbone actually belonged to a modern orangutan, and was deliberately broken and chemically aged to appear ancient. Charles Dawson had died in 1916, and Smith Woodward in 1947, still convinced of the authenticity of Piltdown Man. It would never be known if Dawson or Woodward were the perpetrators or merely the victims of this elaborate hoax. Prior to 1953, Eoanthropus Dawsoni occupied a prominent position in the archaeological and anthropological exploration of human evolution. Today Piltdown Man merits little more than a few sentences or a paragraph in modern texts.

Charles Dawson made a number of other discoveries of dubious zoological and ethnological 'missing links,' including one sighting of a sea serpent in the English Channel. Dawson was a respected lawyer and member of the Society of Antiquaries and the Geological Society, and although he was not considered an authority, his findings and opinions did carry a certain level of credibility. In actuality, Charles Dawson may have been closer to P.T. Barnum, than to Charles Darwin.

Drawing on the tradition of Dawson's Piltdown Man, the Cardiff Giant, Bigfoot, the Shroud of Turin, and other related phenomena, artist Tyrone Georgiou uses archaeological recording methods as a model to illustrate the malleability of fact and information in his 'computer-affected' images. The ironic and satirical relationships Georgiou creates using commonplace forms and symbols of our society as fossils, petroglyphs, artifacts, monoliths and mound sites give us a skewed sense of pre-history.

In the 1989 Fastener Mound Group series, Georgiou prepared an in-depth survey of a geological oddity, which resembles a grouping of three monumental plastic garbage bag fasteners. Georgiou produced a three-dimensional scale model of the area to accompany the maps, diagrams, and artifacts discovered on the site of this fictitious mound. Georgiou's 1990 Niagara Canyon Site series creates the elaborate fiction of a study made in the distant future of an ancient civilization which inhabited the area along Niagara Falls, which in the future will be known as the 'Great Ontario Dessert.' The images 'discovered' on pottery fragments, petroglyphs, and the ruins of 'very tall needle like obelisks' of the Niagara Canyon Site study suggest a population whose religious rituals were based on the 'worship of water spirits,' and whose 'yellow robed priest' performed rituals on boats and rafts for a 'Mist Maiden.'

In the Niagara Canyon Site and Fastener Mound Group series Georgiou uses computer generated models, graphics, text panels, and digitally altered photographs to prefabricate an extensive archaeological/anthropological research project. In the series Unexplained Archaeology of North America, digitally altered photographs document the recurring forms of the 'power-glyphs' seen in monolithic ruins and petroglyphs across the North American continent. These decaying remnants suggest an ancient civilization which praised electricity and technology, a society not too far removed from our own, whose accomplishments are represented by scattered examples of rock art, and ruins which become roadside tourist attractions.

Georgiou's palaeontological farce Fossil Record series creates geological specimens which are imbedded with fragments of the 'power-glyphs' in place of the more common fossilized remains of plants and animals found in sedimentary rocks. As our present becomes the past of future generations, we might want to question what archaeologists will learn from the artifacts of our society. Progress or apathy will eventually relegate our current technology into ruin, where 8088 series personal computers, 8-track tapes, and digital watches will end up as fossils and artifacts in a not too distant archaeological survey.

In the Discovery Series Georgiou moves away from literal excavations, monoliths, and artifacts by rejuvenating the archives of NASA imagery with the artist's own blend of intervention. Electrical outlets and ionic columns begin to appear on the lunar landscape, in orbit with shuttle astronauts, and on the Martian surface documented by the Viking Mars probe of 1976. The images Red Planet and Bad Transmission represent visual data which has been electronically reassembled from remotely captured sources, and transmitted millions of miles through space where it becomes susceptible to garbled transmissions, magnetic interference, possible interception, or alteration.

In the series Digital Blight, Georgiou presents a unique form of digital erosion which affects our perception of the landscape in its digital state. Virtual reality promises a computer generated experience composed of synchronized simulated sensory responses from direct user interaction. At present day VR technology still relies heavily on the suspension of disbelief in order to complete the illusion of reality. Digital Blight warns us of an impending entropy, and the fragile structure of our digital information which is vulnerable to data corruption, disk fragmentation, magnetic erasure, and computer viruses.

The fabricated archaeology of Tyrone Georgiou addresses a number of critical issues revolving around the creation and alteration of information. Our perceptions of history are based on the assemblage of assorted facts, relics, and speculations from the past, and multiple revisionist histories are born from the gray areas in-between. Becoming more dependent on digital information and stimuli, our collective experiences will fall prey to the ease with which digital information can be distorted and manipulated. In the novel 1984, George Orwell wrote, 'Who controls the past controls the future, who controls the present controls the past.' Just as Charles Dawson's Piltdown Man was able to change the perception of human evolution for several years by manipulating the facts using the available technology, our new digital virtual realities will be built on a mutable foundation of virtual facts and virtual histories.