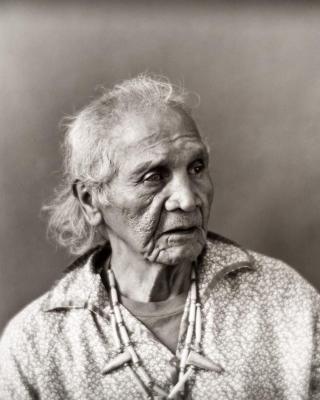 Several months ago Chief Oren Lyons, Faith Keeper of the Onondaga, was honored in an hour-long PBS television program hosted by Bill Moyers. In early October of 1991, Lyons' brother Loren was beaten by several men who robbed him of a bottle of cheap wine and threw him into Onondaga Creek in Syracuse where he drowned.

Lyons' murder is not an isolated occurrence for the Onondaga or other Native People across the country. Poverty, alcoholism, despair and injustice have been well documented within native communities for the past 150 years. Under this cumulative circumstance of difficulty, one that has enveloped Native Americans since their first encounter with Europeans, Toba Tucker was granted permission by a tribal council of the Onondaga to make formal portraits of Onondaga Chiefs and Clan Mothers.

There are many problems inherent in a project of this nature. From the photographs of Edward Curtis representing native Americans as exotic and defeated, through their representation in countless movies as ruthless savages, to nicknames of professional sports teams like Redskins and Braves, the portrayal of Native Americans is seldom accurate or informed.

Because we can't undo history we must bring a certain amount of hope and inquiry when viewing Tucker's portraits. No pictures, no matter how strong, or compelling, or accurate, will significantly alter our understanding of Native Americans. The integrity and care that Tucker has taken in making these portraits offer a starting point of encouragement to find out more about the lives of Native Americans and their contributions to civilization. Knowledge is the only weapon available in order to learn from the tragedy and triumphs of Native Americans.

Toba Tucker spent the months of May and June 1991 as Artist-in-Residence at Light Work pursuing this project and plans to continue the project on her own.

More of Toba Tucker's work can be viewed at http://tobatucker.com/