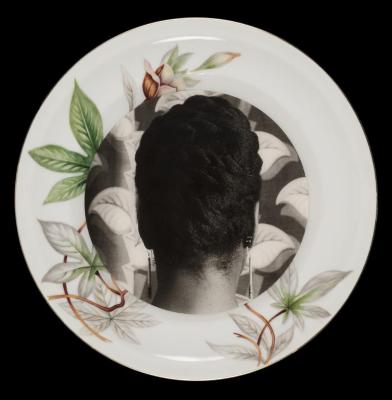 Carrie Mae Weems is considered one of the most influential contemporary American artists. In a career spanning over 30 years, she has investigated family relationships, cultural identity, sexism, class, political systems and the consequences of power. Weems’ complex body of art employs photographs, text, fabric, audio, digital images, installation and video. Weems has received numerous awards, grants and fellowships, including the prestigious MacArthur “Genius” grant and the Prix de Roma. She is represented in public and private collections around the world, including The Metropolitan Museum of Art, The Museum of Fine Arts, Houston, The Museum of Modern Art and the Museum of Contemporary Art, Los Angeles. Weems participated in Light Work’s Artist-in-Residence program in 1988.

A black female comedian delivered a joke recently on TV that went something like this "I think it's important for white people to get to know black people better...at least then, you might have a reason for not liking us." Jokes, stories and anecdotes pass from generation to generation can sustain prejudice, but they can also help us understand our own personal history so that we can draw strength from knowing who we are.

Carrie Mae Weems investigates the power of racial jokes and explores the tradition of oral history in her work which incorporates photographs, narratives, autobiographical accounts and hearsay. Weems feels that "there is something grand in the knowing and creating of ourselves, and something grander still about how we know and create our personal histories." She transforms these feelings into photographs and text that expose our need to understand our personal prejudices while uncovering our profound will to ignore them.

In the hands of a less skilled artist these ideas could be overwhelmed by reactionary ramblings or dismissed as rhetorical preachings. Weems is a skilled storyteller, she conveys her strong personal convictions so that her point is embraced , while the listener is engaged by how the story is told.

Carrie Mae Weems was an Artist-in-Residence at Light Work from July 1-30, 1988. She lives in Northampton, MA and teaches photography at Hamphshire College in Amherst, MA and at Hunter College in New York City.

Jeffrey Hoone (c)1988
The seminal Kitchen Table Series by Carrie Mae Weems is widely recognized as a masterpiece of performance and story-telling within the photographic image. In this series, Weems uses a subtle vocabulary of props, gesture, and gaze to frame complex questions about identity, gender construction, representation, parenthood, and the nature of human relationships. Weems describes her intention of Kitchen Table Series as a personal view on the world around her, “I endeavored to intertwine themes as I have found them in–racial, sexual, and cultural identity and history–and presented them with overtones of humor and sadness, loss and redemption.” The nonlinear narrative and issues presented in Weems’ Kitchen Table Series remain as topical and thought-provoking today as when the images were first created in the early 1990s. Rendered in exquisite black-and-white, this Gelatin Silver Print is hand-printed by Griffin Editions in New York City.

Laura A. Guth is an artist and educator. She lives in Manlius, NY.
Embracing Eatonville Portfolio

Beginning in January 2002 and continuing through the middle of 2003, photographers Dawoud Bey, Lonnie Graham, Carrie Mae Weems, and Deborah Willis spent time in Eatonville making photographs in an effort to provide a meaningful reflection of Eatonville's spirit and character while concentrating on the social, political, and cultural landscape of this historically unique place in Central Florida. In an attempt to address the unique character of the community and its history, these artists have produced a diverse portrait of Eatonville using traditional documentary approaches, as well as interactive and interpretive methods.

Deborah Willis' color landscapes and portraits describe the look and feel of the community, while emphasizing the importance of the church and the beauty parlor as traditional meeting places. Lonnie Graham's black-and-white landscapes evoke the feel of romantic charm reminiscent in the work of Clarence John Laughlin-on a more modest, but equally revealing scale-while his portraits present an openness between photographer and subject that reveals as much as his landscapes conceal. Dawoud Bey looked to the next generation of Eatonville's residents as he combined portraits of high school students along with quotes from each subject, which serve as both time capsules for the community and expressions of personal hopes, fears, and dreams. Carrie Mae Weems departs most from the traditional photographic survey format as she assumes the character of Zora Neale Hurston wandering through Eatonville. Her photographs reflect the quiet serenity, simple pleasures, and ease of enjoyment that Hurston found so familiar and comforting in her adopted home.

Later in this catalogue Franklin Sirmans discusses the artists' work in greater detail, and N.Y. Nathiri, executive director of the Hurston Museum, provides her reflections on Eatonville's history and contemporary significance. The exhibition will travel to the Hurston Museum in January 2004 to be included in the Fifteenth Annual Zora Neale Hurston Festival of the Arts and Humanities. Plans are also underway for a more extensive traveling schedule for the exhibition.

Zora Neale Hurston was an enigmatic artist and folklorist who wrote stories, novels, plays, anthropological folklore, and an autobiography. When compelled, or perhaps when necessary, Hurston would often embellish stories about her own life and experiences, never at a loss to improve on the ordinary. In the decades after her death in 1960, her spirit of creative independence, mixed with serious scholarship and a powerful personal writing style, made Hurston the perfect muse for a generation of artists and cultural workers looking for the signpost of change and a beacon of hope in the dawn of the Civil Rights Movement. She expressed her own passions for the creative spirit when she wrote, "Anyway, the force from somewhere in Space which commands you to write in the first place, gives you no choice. You take up the pen when you are told, and write what is commanded. There is no agony like bearing an untold story inside you." The artists and organizations that came together to produce this project wanted to illuminate the untold story of Eatonville, while carrying the torch of Hurston's legacy as their inspiration.

In the ensuing years since Hurston's time in Eatonville, the landscape of Central Florida has become fertile ground for the creative capital of America's tourist industry radiating out from Orlando a few miles away, increasing the pressure on Eatonville to retain its unique historical place and character. In 1987, a group of concerned citizens led by N.Y. Nathiri formed the Association to Preserve the Eatonville Community, Inc. (P.E.C.), which was successful in having Eatonville listed on the National Register of Historic Places in 1998. These efforts also led to the founding of the Zora Neale Hurston National Museum of Fine Arts in 1990.

Carrie Mae Weems was invited to exhibit her work at the museum in 1999. At that time, conversations between Weems and Nathiri led to serious discussions concerning the formation of this project. All of the artists selected to work on Embracing Eatonville have also participated in Light Work's Artist-in-Residence program, bringing the project's partnership full circle from Eatonville to Syracuse. The collaboration, sparked by Weems' inquiries, began in earnest in 2001 with the idea to give artists the opportunity to look at Eatonville in order to draw attention to its character, its citizens, and its place in history.

Photographic surveys were so popular in the 1970s that the National Endowment for the Arts created a funding category devoted to sponsoring these efforts. Several significant projects were supported during this time, but changes at the NEA and in the public's support of the arts eliminated the funding category of photographic surveys, leaving support of future projects to other sources which practically eliminated them altogether.

Artists always work whether there is support of their work or not. Embracing the importance of a project about Eatonville, these artists, led by Weems, set out to do what the government no longer felt was relevant.

While there are aspects of Embracing Eatonville that link it to the tradition of photographic surveys, the artists have worked to look at Eatonville as a starting point and springboard to extend Hurston's vision for the celebration, accomplishment, and preservation of African-American art and culture. We honor many things with this project: the enigmatic and creative character of Zora Neale Hurston, the importance of history celebrated by the successful efforts of the Association to Preserve the Eatonville Community, and the muse that Zora Neale Hurston is for artists more than forty years after her death, where her sense of the importance of place became a destination, a state of mind, a call to independence, and a cradle where community ideals and shared experience provide inspiration and sometimes, daily bread.