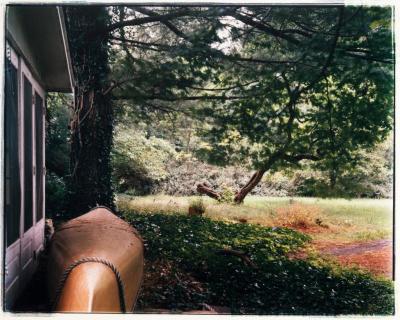 Rhea Garen makes photographs of neighborhood yards. Her work conveys the stillness found in the unpopulated scape while the distance of her voyeurism eludes to her lack of ease about trespassing in other peoples' spaces. The yards are not manicured or lived in, but neglected, overgrown, and filled with unfinished projects. A bike is barely visible in a bramble along a fence overtaken by vegetation. Drainage pipes, crumbling concrete, and discarded tools occupy another photograph. A pool, draped in plastic, looks forgotten and hidden by its winter wardrobe.

Garen shoots with a 4 x 5' camera and as she possesses 'other people's spaces' with her camera there is an inherent emptiness to this meeting ground. She will use this grant to begin work on multiple exposure images that draw from memory, family history, the knowledge of her parent's Holocaust experience, and her recent struggles with mental illness.


Founded in 1973, the Annual Light Work Grants in Photography competition is one of the longest-running photography fellowships in the United States. Each year, artists, critics, and photo-historians residing within a fifty-mile radius of Syracuse, NY are encouraged to apply for the grants, and as part of the submission process, applicants are asked to submit ten images for consideration along with their applications. Through programs such as the Annual Light Work Grants in Photography, it is Light Work’s goal to provide support and recognition to Central New York photographers and artists working in the field of contemporary photography.