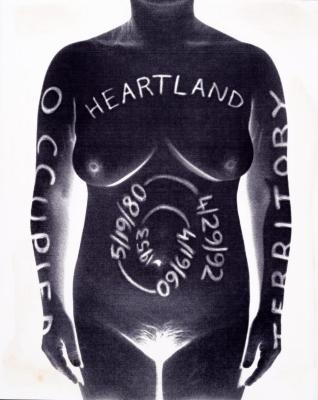 For a more recent CV or bio please visit the artist's website, www.yongsoonmin.com

Alan deSouza and Yong Soon Min worked in collaboration when they participated in our Artist-in-Residence program in July, 1992. During their residency, and in previous collaborations, the artists explored their intersecting interests in the characteristics and formation of personal identity.

Both artists emigrated to different countries and cultures, Min from Korea to the United States and deSouza from Africa to England. This early experience of knowing two different homes runs like a seam through their work in an attempt to rejoin separate experiences, activities and knowledge. The act of coming together is played out both through the formal qualities and intellectual capacity of the work they produce and the act of collaboration itself. In several of these pieces designed specifically for the Contact Sheet, the images are joined at the center. This simple devise acknowledges that the artists' share equal responsibility for creating the images. It also symbolizes a binding effort to create a shared personal identity from a combination of experiences and desires struggling against intolerance to become whole.

Understanding and embracing one's identity is at best a complicated task of simultaneously embracing and rejecting historical, moral, cultural and spiritual beliefs. Too strong a mix for any one medium to cover, deSouza and Min converge on the issues with a vast palette of words, pictures and structures. The central point of convergence and the dominant arena for their explorations is their bodies.

They declare the body as occupied territory, claimed by racial taunts by a dominant culture and restrained by moral imperatives that forbid sexual expression. Just as they present the notion of the body under claim, they present themselves breaking through those restraints. They use their bodies as a palette to contain their expressive gestures and as a mirror to reflect their gaze, their words, their marks and their ideas. These acts of frivolity, freedom and impetuous self assurance become the dominant elements of their work loudly stepping out from the background of cultural and moral barriers they acknowledge and consume. Through the process of collaboration they bring together, draw out and chart a description of themselves that endures through persistent restraints.

Both artists live in New York City and were recently married,to one another.

Issues of race, cultural identity, and politics of representation infuse the photographic and installation based works of artists Allan deSouza and Yong Soon Min. Since 1992 they have been frequent collaborators, both as artists and husband and wife. Their shared experiences of cultural displacement – deSouza was born in Kenya and emigrated to England, Min was born in Korea and emigrated to the United States – has become a common thread throughout their independent and collaborative works.

In a recent collaborative installation prepared for Camerawork in London entitled alter idem/performing personae, Min and deSouza explore the relationships between anthropological study and photography, the position of anthropologist/ethnographer to the native/subject of study, and the role of the artist as native informant within the art world. In one component of the installation which is included in this exhibition, several photographs depict the artists throughout Los Angeles – their current habitat – wearing t-shirts with the printed words native and informant alternating on the front and back. In this series the artists themselves alternate as both guide (informant) and object of study (native) at various public locations which carry their own ethnic connotation, but are generally associated with tourism or consumer culture: i.e. Chinatown, Little Tokyo, the Watts Towers, Mann’s Chinese Theater in Hollywood, and so on.

In the series Defining Moments Yong Soon Min offers a chronology of significant events relating to her own personal and political history. The first image of the series serves as a guide, with a list of the dates presented in the series spiraling outward from the artist’s navel across her torso, beginning with 1953 – the year of the artist’s birth and the end of the Korean War. Superimposed over the face of the artist in each piece are appropriated images taken from the before mentioned dates. The third and fourth images of the series represent two of the most significant student uprisings in recent Korean history, April 19, 1960 which marked the date of the student uprising that overthrew the government of President Syngman Rhee – also the year of Min’s immigration to America, and May 18, 1980 which references the Kwangju student uprising and massacre where over 240 people were killed. The fifth image of the series marks the 1992 Los Angeles riots which has a direct impact on the lives of many Korean-American business owners located in South-Central Los Angeles. The sixth and final image in the Defining Moments series does not reference a particular date, but looks to a possible reunification of North and South Korea with the image of Mt. Paektu – the mythical site believed to be the birth place of Korean people located in North Korea, which also serves a symbol for the supporters of Korean reunification. Written across the artist’s forehead and chest are the words DMZ and HEARTLAND, signifying both the political and symbolic separation and connection of the Korean people.

The separation between North and South Korea and possibility of reunification is also presented in a grouping of four images taken at the Reunification Observatory in South Korea near the border with North Korea in the series Kindred Distance. The mannequins and displays shown in these photographs are part of a larger informational exhibit about life in North Korea. Showing everyday household objects and clothing styles, the exhibit evokes both a sense of nostalgia and a certain level of superiority felt by the South over the North. The text plays off the Korean and English languages with the word whe which is Korean for why. The series ends with an image containing the English expression our home written out phonetically in Korean. In the series Kindred Distance Min presents the divisions between North and South Korean peoples and acknowledges her own feelings of displacement as a Korean American and voyeur gazing at these images of South Koreans as the objects of curiosity.

Min originally created the Belly Talk series for the University of Michigan’s Bus Shelter Project.  The images were originally presented as large-scale transparencies mounted on the sides of bus shelters near the University. For this series, a random sampling of individuals volunteered to be photographed by the artist and to write a personal narrative describing their own defining moments. The participants were asked to write the text in the form of a spiral pattern which would then be overlaid over the photograph of the subject’s stomach with the text emulating from the subject’s navel. The varied narratives range from a personal introspection of an individual’s chosen life path to a metaphorical account of the subject’s stomach symbolizing their own fragile mortality. In this direct and spontaneous outpouring Min as intermediary presents these subjects with an alternative means of relating their own personal oral histories.

As both an artist and writer, Allan deSouza uses humor and parody in his work which meshes photography, collage, computer imagery, and the written word. In his work deSouza hopes to “create fictional narratives which, masquerading as autobiography, cast doubt upon the process of truth-making.” In two of his most recent projects, the Dick and Jane series, he references the archetypal storybook characters who themselves define gender difference, but in this case deSouza turns the assumed gender roles inside out. In the Dick series, extreme close-up photographs of the artist’s mouth are cropped and rotated in order to resemble a woman’s vulva. The interplay between the appearance and the reality of these images evoke both male heterosexual desire and a manifested fear of castration. As a counterpoint, the Jane series presents a group of textual narratives arranged in the form of vased which rise up like welts on the surface area. The color and texture of each image could be perceived as skin or clay, noted by the artist as the “biblical/primordial stuff of life.” The narrative assumes a “you-Tarzan, me-Jane” posture, masquerading as the male in this case, beginning each self-declaring statement with he. In both the Dick and Jane series deSouza uses the underlying notion of pretense and fiction to comment on the interchangeability of assigned gender roles which are themselves artificially constructed.

In the series, An American Notebook deSouza references a very specific genre of American painting known as the trompe-l’oeil (fool-the-eye) or magic realism, produced by painters such as William Michael Harnett, John F. Peto and John Haberle in the late nineteenth century. The paintings of the magic realists presented unusual still-lifes of objects and personal documents arranged over a two-dimensional surface resembling a photographic collage more so than a still-life painting. deSouza became interested in these paintings as a type of “quiet narrative,” and into this structure he added images and artifacts of what he considered to be “hidden or silenced narratives” in American history. A Closet Door, After Peto, 1904 presents images of Native Americans from early book illustrations, advertising memorabilia, film stills, and the ever-present image of the Lone Ranger and “his faithful Indian companion” Tonto which reference once historically accepted practices of representing Native American peoples.

In deSouza’s Coconut Chutney series, the artist examines the artificial construction of “Indianness” within popular culture. In the image Taj Company showgirls are flanked by soldiers from the Indian military in front of the Taj Mahal, becoming India a la Las Vegas, Atlantic City and Disneyland. In Bombay Duck and Bombay Fling collaged fragments of Hindi film posters, nineteenth century ethnographic portraits with the superimposed heads of British soldiers dressed up as Indians, and architectural artifacts taken from the Taj Mahal Casino in Atlantic City merge together to form a perplexing relationship between Indian culture, British colonialism, and American excess.

In both the collaborative work and independent projects in this exhibition, Min and deSouza have themselves become the informant, filtering their own experiences and experiences of others to a broader audience. As artists of color their work seeks to circumvent the conventions of the anthropologist/ethnographer presented in the installation alter/idem/performing personae. In recent years the growing discourse on issues of race and identity have fractured artists, critics, and viewers into many different camps of thought, establishing rigid boundaries on how far one can venture outside of their own gender and/or ethnic background. The creation and criticism of work dealing with issues of race and culture have become a veritable minefield of expression in which deSouza and Min are able to freely move across, but not without their own concerns. Both deSouza and Min have produced works which are directly inspired by their shared experiences of coming to terms with personal and cultural identity and their assimilation into another culture, but for both artists there are questions raised over the expectation of their work, as artists of color, being restricted to autobiographical experiences alone. Both artists prove that there are AlterNatives to expressing cultural and personal narratives in their work. In the end artists deSouza and Min invite us into a truly multicultural dialogue, where we are more likely to discover the homogeneity within all of us by acknowledging the collective experiences of others.