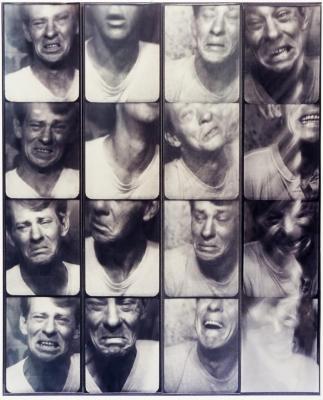 At a party an accomplished musician was intently studying the many curious art objects scattered around the living room. After staring at one small sculpture for several minutes he turned to the host of the party and asked, 'What is it?' Without missing a beat the host sarcastically replied,'Well if you stare at it long enough it makes music.' If Chris Sullivan was at the party he would have been intrigued by the challenge and perhaps by the end of the night would have coaxed a note from the piece of sculpture, or at least would have had a good time trying.

Altering and questioning perspectives is the key quality of Chris Sullivan's photographs. Rarely content to accept things the way they are or the way he finds them, Sullivan begins his process of creating photographs by asking questions and then providing possible answers. His photographs often raise as many questions as they answer, which makes the process of inquiry and innovation the content of his work.

When asked why in one of his photographs he had given a tumbleweed a haircut, his reply was simply, 'It needed one didn't it?' That line of reasoning informs Sullivan's work with an genuine absurdity crafted from a careful blend of humor, satire and imagination. So when he creates a photograph of a sneaker that has been turned inside out to look like a reptile we know we are seeing the difference between someone making a joke and someone telling us a story that is funny.

Chris Sullivan lives in San Francisco, California and participated in our Artist-in-Residence program in August, 1992.

As a youngster he tried to think of things no one had ever done before. Sometimes he stood in the backyard doing them, making series of odd noises, guttural exudations mostly, coughs, grunts, barks and squeals, occasionally punctuated with the relative euphony of arrhythmic chanting and humming; and concurrently shaking his head, flailing arms and moving facial muscles in arcane configurations (he hoped) until it seemed certain something unique had occurred, an event no one else, in the history of the universe, had ever quite duplicated.
(Except from the short story The Five Things by Chris Sullivan)

Like the boy in the story who is searching for something which has never been done before, Chris Sullivan creates new relationships and associations from an assortment of flotsam and jetsam including roadside debris, abject furniture, dubious paintings, mattresses, tumbleweeds, and taxidermal roosters.

Sullivan began photographing in the early 1980s when he became interested in the ability of the medium to construct new realities, events, and characters. In one of Sullivan's earliest photographic projects, The Affable Man, Sullivan dressed in 1970s polyester golfing attire and photographed himself as a good natured real estate salesman with an irreducible grin. In the Shrubman series Sullivan continued along a similar path by taking a potted house plant, giving it arms, legs, and a wardrobe, and photographed this living shrub in different domestic settings inside and outside the home. In both these series Sullivan creates characters and then photographs them in equally unusual and unlikely settings. From Sullivan's point of view salesmen and shrubbery may be one in the same in some other realm.

In the ongoing project The Journal of Public Domain, Sullivan collects and solicits contributions of notices, letters, flyers, proclamations, and scraps of ephemera found on sidewalks, telephone poles, bulletin boards, and car windshields and presents them as a journal of found art. The examples range from a letter with lipstick traces containing a 'Chicken Dobie' recipe, to threatening notices about blocking driveways, to statements of personal accomplishment and tragedy. As an outgrowth of The Journal of Public Domain, Sullivan's photographs of discarded mattresses evoke an allegorical tapestry of the human condition with their weary evidence of patterns, stains, and worn fabric.

Sullivan has constructed and photographed environments in large warehouse spaces, open fields, abandoned tract homes, and the cramped quarters of the artist's own personal photo booth. Thematically and stylistically Sullivan employs many of the same strategies in all of his projects, the garish colors in his photographs, the odd assortment of props, settings, and backdrops, the relationship between language and the image, and the artist's passion for the discarded. In an interview, when asked about the symbolism of the reoccurring tumbleweed motif in his earlier photographs, he responded that 'tumbleweeds are kind of neglected in the history of photography.' In actuality Sullivan's use of tumbleweeds was due to their overwhelming presence in the landscape around the warehouse where he was employed. At night he used the same warehouse as his photo studio where the tumbleweeds, like the Shrubman, took on a life of their own.

In trying to understand Chris Sullivan's distinctive methodology and inspiration for constructing these images, we may be left to ponder what a spinning fruitcake suspended over the head of Abraham Lincoln means in the image Of Wonder and Doom, but that may be the idea. According to Sullivan, 'The intent was to amuse and inform, as well as to distract, digress, abstract, regress, inflect and occupy.' In Chris Sullivan's work we are privy to a window into his own peculiar construction of reality where the visual and verbal clues do not always yield a conventional point of reference.