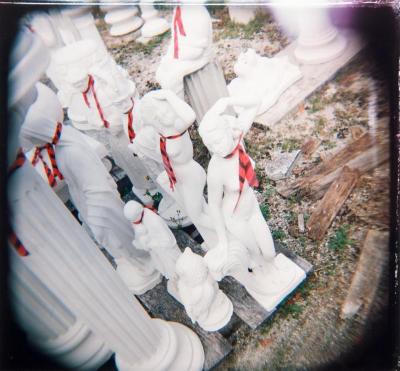 From 1988-1992, acting as a self-appointed town photographer, Deborah Brackenbury created a portrait of Archer, FL, her home for the past several years. In this series Brackenbury photographed the residents of Archer at work and at play. She photographed the public side of Archer at civic events and recorded their private times and family celebrations. Her descriptive black-and-white photographs, made with a large format camera, allow us to meet the residents of Archer on their own terms and at their own pace.

After working in black-and-white for quite some time Brackenbury began to make pictures of Archer in color. The photograph on the cover shows how the change in materials has given Brackenbury the opportunity to look at Archer from a different perspective. Trying to take advantage of the brilliant pink azaleas as a backdrop for their portrait, she has place an elderly couple facing the camera and the full intensity of the Florida sun. Perhaps concentrating more on the vibrant color of the azaleas than the gestures of the couple, Brackenbury catches the couple between poses. The man is shielding his eyes from the sun and the woman is caught with her eyes closed. If Brackenbury had made this picture in black-and-white we imagine she would have selected another frame to print, preferring to make eye contact with her subjects, a consistent feature of her black and white portraits.

As Brackenbury continued to photograph Archer in color she began to take a more interpretative approach to her subjects. The portrait of the couple comes across as a frail and disoriented version of the classic painting American Gothic. This depiction, while awkward and uncomfortable, matches Brackenbury's jarring and uneasy view of Archer as it makes the transition from a farming center to a suburban bedroom community. By selecting new materials to work with Brackenbury has discovered a different way to explore the nature of the people and the place she has come to know so well, and in the process she has given us a more complete picture of their life and times.

Deborah Brackenbury lives in Archer, Florida and participated in our Artist-in-Residence program in July 1993.