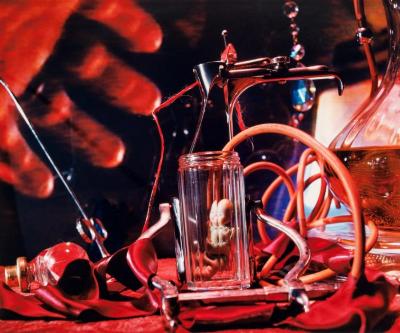 Amy Jenkins is an American artist whose video installations, films, and photography have been exhibited, screened and collected internationally. Her first feature-length documentary, "Instructions on Parting," premiered in February 2018 at the Doc Fortnight Festival at The Museum of Modern Art, NY. The film won Best Feature Documentary at Athens International Film and Video Festival, OH, and has screened at many festivals, including Montclair Film Festival, NJ; Independent Film Festival Boston, MA; New Hampshire Film Festival, Portsmouth, NH; and Sydney Film Festival, Australia. Jenkins is best known for her work with the moving image combined with sculpture. Her video installations, which focus on themes such as familial relationships, desire, and identity, have had numerous group exhibitions at museums over the past twenty years, including The National Gallery of Art, Washington, DC; The Haifa Museum, Haifa, Israel; Oberösterreichisches Landesmuseum, Linz, Austria; the Akron Art Museum, Ohio; Sioux City Art Center, IA; and Palm Beach ICA, FL. Jenkins is a 2018 grantee for Pre-Production support from LEF Foundation. She was chosen as a 2014 Robert Flaherty Film Seminar Fellow, and has been a two-time nominee for the CalArts Alpert Award in Film/Video. Jenkins’ work has received wide support from granting organizations, including New Hampshire State Council for the Arts, the Pollack-Krasner Foundation, New York Foundation for the Arts, Jerome Foundation, New York State Council for the Arts, the Berkshire Taconic A.R.T. Fellowship, the Aaron Siskind Foundation, and the Experimental Television Center. Her artwork has been reviewed in many publications, including The New York Times, ARTnews, Bomb, Artcritical, Performing Arts Journal, and The Village Voice.

Fantasy and myth are the oldest genres in the history of story telling. From the ancient Greeks to the Brothers Grimm to Saturday morning cartoons, fantasy and myth have been used to shape intangible concepts and advance moral codes of conduct and behavior. Stories that exercise fantasy and myth rely on illusions as a primary source for plot and action. The power and longevity of myth and fantasy as a staple of story telling leads us to the conclusion that in order to better understand the authenticity of life we often find it necessary to suspend our beliefs in reality.

The photographic work of Amy Jenkins explores this 'netherworld where the real and the imaginary co-exist and illusions and reality become intertwined.' The fantasies and myths that Jenkins creates are grounded in the late 20th century specter of electronic mediums yet borrow conventions from throughout history. Jenkins combines objects of fantasy with environments of illusion into seamless photographs that create a hyper world of invention that Alice might have found if she fell into a pot hole along the electronic highway. In her large scale photographs, her inclusion of miniature objects and use of vibrant colors and gentle light seduce us further into her illusions by altering our sense of proportion and depth.

In this process of illusion and seduction Jenkins provides the opportunity for many themes and subtexts to unravel. Her photographs allow our imagination to wander much like fairy tales give us the freedom to imagine a parallel reality where anything is possible. Just as fables cut broad paths across large themes, Jenkins concentrates on themes of gender, authority, desire and transgression.

In the image on the cover a glass slipper and the carcass of a cicada locust share prominence on the same shinny pedestal in a display of tension between good and evil, creation and destruction or grace and repulsion. Jenkins plays out this drama of transformation within a video background depicting a grand room from a previous century, further blurring the distinction between the visceral and the imagined.

By recognizing and exploring the state of equilibrium where our tactile experience ends and fantasy begins, Jenkins' work shows how the suspension of reality is a universal step in the process of how we arrive at our perceptions and actions.

Amy Jenkins lives in Brooklyn, New York and participated in our Artist-in-Residence program in September 1993.