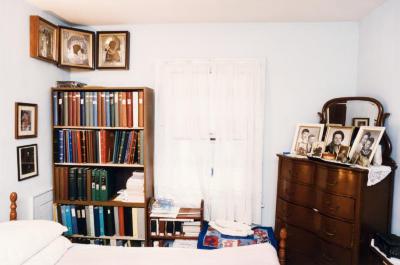 Within a few hours of arriving in Syracuse to begin his residency Victor Lugansky was speaking in his native language to a Russian immigrant who had left Russia shortly after the revolution in 1917. Lugansky came to Syracuse with many projects in mind and this chance meeting on his first day lead to several more meetings and introductions during which he made the photographs reproduced here.

Although the community of art photographers in Russia is small when compared to the United States, there is a willingness of most Russian photographers to explore varied techniques and approaches to the medium. Among other projects, Lugansky worked produced color prints reproduced here, which are a departure from his past work completed almost exclusively in black and white.

Loyal to the traditions and the ideas expressed by artists of the Russian avant garde of the 20s and 30s, Lugansky uses photography 'to investigate the inter relationship between the human and the technical, and between the social and psychological motivations and content of contemporary life.' In reaching back to the artists of the 20s and 30s for inspiration, Lugansky ironically reveals the same desire to reach back into history expressed by the Russian immigrants in his portraits.

In one portrait Vitaly Sorokin sits at the head of his dining room table where a traditional Russian Easter dessert has been placed. Small curios and Russian crafts rest on a side table and a portrait of Jesus seems to be keeping an eye on the room from its place high in the corner. We sense that Lugansky agrees with the choreography of the room and uses a wide angle lens to exaggerate Mr. Sorkin's look of authority and respect for tradition.

In Lugansky's portrait of Vera Kern a painting of Alexander Pushkin the great 19th century Russian poet, dominates the photograph. Lugansky has framed Ms. Kern tentatively at the edge of the photograph as she looks away with anxiety as if she agrees with Lugansky that Pushkin needs more room in the frame. Pushkin's achievements are often compared to Shakespeare and Dante. He believed that the obligation of the poet was to lead society to the truth. Rather than discarding tradition, Pushkin made his greatest works by forging poetry in a vernacular language inspired by the subjects of Russian history and folklore.

In his portraits Lugansky shows us that by understanding and learning from history and tradition we move forward to new discoveries and challenges. As Lugansky recognizes his subjects bond with tradition, he simultaneously claims the same connection for himself.

Victor Lugansky lives in Moscow and participated in our Artist-in-Residence program from April 10 to May 10, 1993.