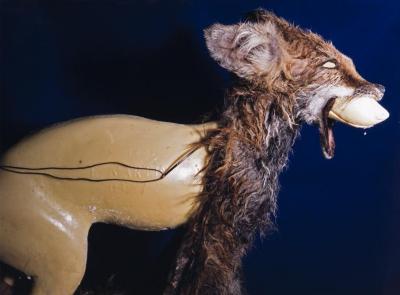 Like car crashes, Biff Henrich's photographs make us a bit queasy as we look through our fingers to get a better look.

For the past ten years, Henrich has created a significant body of work by presenting our cultural practices as both artifacts and symptoms. Like a chiropractor who examines a patients fingernails for clues that indicate health or aberrations, Henrich looks at the outskirts of societal practices in order to understand the behavior at the center.

In a recent series, exhibited in the Light Work Gallery from October 1 - November 22, 1991, Henrich turned his attention to the practice of taxidermy. In this series, Henrich photographed a variety of animals in various stages in the process of preservation. Unlike the 'stuffed animals' we all have encountered in museum showcases or hanging as trophies from barroom walls, Henrich's creatures are still in the dressing room waiting for the glue to dry, the pins to be removed, and their fur to be combed. Standing in regal formality before backgrounds of rich monochrome, the animals posture in a display of evidence, examination and curiosity.

By showing us the process instead of the finished product Henrich makes possible a wide range of reactions from fascination to disgust, simultaneously appealing to both halves of our brain at the same time. This divergent tug looms quietly in the undercurrents of Henrich's photographs causing us to sneak a smile when no one is looking. The graceful yet mischievous quality of his photographs catch us with their elegant visual appeal and always manage to elicit an honest response, whether we like it or not.