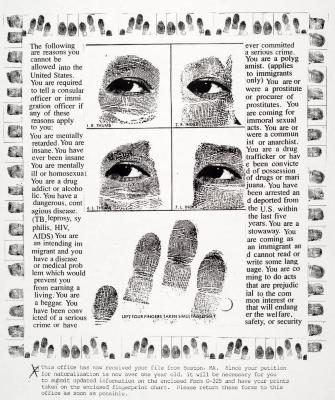 Diane Nerwen – Syracuse, NY Onondoga County. Diane Nerwen is a video artist whose recent work addresses ritual, national and ethnic identity, and body politics. In Ajax for Life Nerwen weaves fragments of culture and personal experience into non-linear, multi-layer narratives. This video collage combines appropriated images, sounds, computer animations, text and shot footage. Rituals such as bathing, circumcision and Jewish dietary laws are juxtaposed with footage about ethnic cleansing, religious separatism, nationalism, and a children's rhyme about 'germs' linking personal recollections and stories with cultural constructions of difference and racism. In addition to her video work Nerwen uses photography, computer imaging techniques, and color and black and white xeroxing. She will begin a new series of work which will focus on "systems and institutions that produce and indoctrinate racism," structures of Zionizm, and her experience of growing up in a traditional Jewish family.

The following is a statement about her series of collages,

'This Xerox collage was from a series of works which address issues of national identity, language, immigration, voting, and cultural alienation. They tell fragmented stories of my decision to become a United States citizen, questioning that decision and process, and my experience of growing up in the French province of Quebec.'