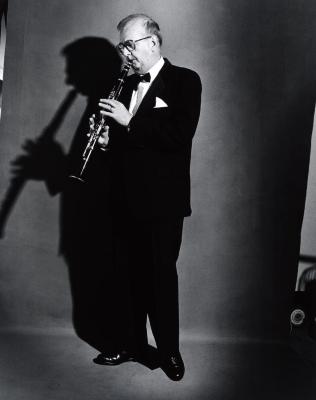 Elise Mitchell Sanford made a startling discovery after looking through her family photo album one Thanksgiving - she didn't recognize herself. She knew that she was in all those faded pictures, but instead of seeing herself as one person in different situations and at different times, Sanford was seeing and thinking about herself as many different people. At the time Sanford had been taking a few photography courses in order to turn many years of accumulated credits into a bachelors degree, and she turned to photography in order to get a better understanding of why she thought about herself so differently in all of those snapshots.

Following the example of artists like Cindy Sherman, Sanford began a series of self-portraits in order to visualize how different elements of gesture, clothing and context define expressions of identity. Sanford was also taking courses in Women's Studies where issues of identity were placed in the context of how women are controlled by the roles they are delegated in society. She realized at age 61, that the farther women progressed in age and attitude from traditional female 'ideals' of wife, mother, and lover, the more invisible they became in society. Within this context of discovery and awareness Sanford began to work on a series of portraits of women over the age of fifty posing as someone who had been influential in their lives. A few years later she expanded the series to include men. Together they form a telling portrait that goes beyond issues of gender and aging to examine the many cultural and social constructs that influence how we become who we are.

From this series it is clear that the medium of photography plays a large role in the formation of identity. In nearly a quarter of the images in the exhibition Sanford's subjects pattern their pose and gesture after well-known photographs, from Steichen's portrait of Gretta Garbo to Barbara Morgan's portrait of Martha Graham. Early on in the project Sanford recognized the ironic play between the facts that photographs record, and the illusions that they convey. In several portraits the clutter of Sanford's studio peeks out from beyond the edge of the seamless background paper. This clever devise adds a level of awareness to the fantasies Sanford and her subjects are creating, allowing the series to convey issues and ideas about photography and identity. By creating a context of self-awareness and examination that transcends the kind of blind idol worship that we might associate with Elvis impersonators, Sanford allows her subjects to reveal their own identities, while posing as someone else.

When Margaret Deppen, at age 87, poses in a bathing suit in imitation of Betty Grable's famous over the shoulder pin-up pose, we get the distinct impression that Ms. Deppen is having fun and congratulating herself, as much as she is paying homage to Betty Grable. Throughout the series the choice each person makes about who to emulate is as revealing as how they pose or gesture to complete their fantasy. James Alsbrook, an African-American man, stands against a stark background posing as his grandfather. In another context we would notice nothing special about the image, but within the series Mr. Alsbrook's choice to be his grandfather speaks about the importance of family when so few role models exist for African-American men. Another insightful choice is made by Natsu Ota Taylor, a Japanese-American woman, who chose Franklin Delano Roosevelt, the president who declared war on Japan, as her fantasy. Perhaps not without some pain, Ms. Taylor defines and challenges our preconceptions of who can embrace patriotism, and what it means to be an American.

When Sanford began the project one of her intentions was to 'show the strength of female aging - to show strong, mature women in fantasy roles - women who have a sense of their own humanity, identity, and humor.' In most instances whether they are portraying a playful Marilyn Monroe or a solemn Mother Theresa, each woman that Sanford photographed conveys a sense of confidence and control. The breadth of the personas expressed by the women in the series place no limits or definitions on what kind of woman is defined as strong or independent, but emphasizes that women in control need only the strength of their convictions.

Sanford completed most of the series in Athens, Ohio, a town small enough that word spread quickly, and many people volunteered to be included. At this point she began to photograph men, who often went to great lengths to perfect their make-up and costumes, including one man who shaved off his mustache right in her studio. In many cases the men revealed as much about the formation of identity as the women, including James Alsbrook, mentioned earlier, and Stanley Grean who posed as his father, Stanley Greenberg, Sr.. Laurence LarsonÕs remarkable likeness of Eleanor Roosevelt, is one of the many cross-gender impressions offered liberally by both the men and women, knocking down another stereotype of older people as strict social conservatives.

Where the men truly seem to relish their roles as would-be cowboys and movie stars, the women seem to be more comfortable creating fantasies rather than living them. Sanford began the series to explore issues relevant to herself and other woman, so perhaps it's just a subtle hint that the women were the pioneers of the series and the men followed, but then at age 66 Sanford probably won't gloat, when there is so much more work to do.