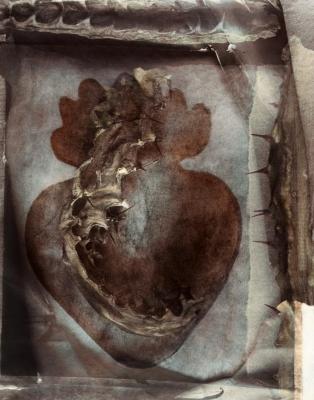 In an extended statement about her career, Kathy Vargas traces her work as a photographer from early rock and roll pictures, to documents of her neighborhood in San Antonio, to her current manipulated images which are influenced by a mixture of childhood experiences, pre-Columbian myths, Latin -American Catholicism and, the writings of Latin American authors. It was while working at a film production house in 1971 creating special effects for James Keefer, who eventually became the animation supervisor for the film Return of the Jedi, that Vargas became convinced that photography was the perfect medium for manipulation.

Vargas kept this conviction in the back of her mind for several years as she eventually moved from commercial photography to more personal work that included photographs of her family and friends. This work lead her to a documentary project on yard shrines that were almost as common as fire hydrants in her East Side San Antonio neighborhood. While researching these shrines, Vargas became interested in Mexico and 'the testimonies of religion that had a connection to the shrines, the endless crucified Christs with their milagros hanging everywhere.' At the same time Vargas began rereading the literature of Latin American magic realism, and became interested in how the writers, in particular Garcia Marquez, would 'layer not just the possibility, but the probability of magic onto the underpinning of reality.' She recognized the same kind of encoding in the symbols of the shrines she had been photographing, and began to recall some of the mythic tales from her childhood that were 'rich with indigenous deities from pre-Columbian cultures...that featured an active afterlife as a sign of an expectation of some form of continuation, resurrection or remembrance.'

Vargas began to incorporate these ideas into her own work creating rich tableaus in which she combined color and symbols through double-exposure and hand coloring techniques. She describes this work as 'The real memories of childhood experiences mixed with pre-Columbian myths and Latin American Catholicism shaken and stirred in the technology of an old 4x5 camera which made double exposure so easy-- which made that Garcia Marquez layering of time so visually accessible.'

The cycle of life, death and resurrection is present in all the forms and symbols that Vargas brings to bear on her current work. In the images reproduced here Vargas concentrates on the symbol of milagro hearts - small silver hearts offered as testimonies for the hope of a miracle. Some are made for specific people - friends who have died from AIDS, some are inspired by music, while others are created as an exercise honoring 'the circle of existence where life leads to death, but the contemplation of death leads to the love of life.'

Kathy Vargas lives in San Antonio, Texas and participated in our Artist-in-Residence program in August 1994.