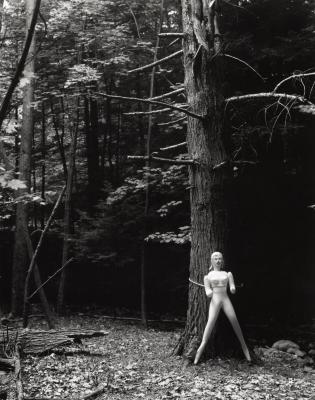 In her photographs, Barbara Yoshida constructs a situation which is intrinsically silent and lacking in passion. In Doll and Tree-1, a plastic woman, whose mouth is designed only for penises and whose body only for the presence of forced exhalations, is tied to a lone dead tree in the center of the forest. This sexual surrogate has to be tied and controlled in the natural world in order to exist there. For Yoshida, it is this idea of restricting and reducing human passion and fantasy that fuel the misrepresentation of sexuality and leads to her series, Conversations with a Dead Pig. She suggests that the connection between woman and nature sharpens the relationship among notions of the unruly side of pleasure and femininity, precognitive animal consciousness, and the power inherent in various identities and roles.

In the process of making art, Yoshida herself takes on hare-like qualities, she doubles back, crosses borders, jumps great lengths, and digs for herself intricate warrens of meaning within the composition. Her images tell of a great hare woman whose love and caring has given birth to the smug head of a beast with whom she must now converse. The powerful, widespread legs of this woman reveal her animalistic openness and the ease with she assumes a traditionally male pose. The composition of the image affirms the animal woman's power in the situation as she towers over this pig-headedness.

In Yoshida's images, as in Joseph Beuys performance, How to Explain Pictures to a Dead Hare, explanations are muted and abstracted. It is photography's intrinsic silence and the cold ambiguity of the dead pig head, when contemplated with the title word 'conversations,' that create a tableau onto which Yoshida projects the relationship of power and sex, and the concomitant problems in discussions of gender and sexual representation. It is through this exploration of conflicting viewpoints that the artist restores visual symbols, gesture, and nonverbal sign as the primary means of communication.

In many cultures the hare has traditionally symbolized incarnation and fertility, the female nature, the sacrificial beast. The hare's highly-strung nature is depicted in historian Michael Loewe's Ways to Paradise, 'the animal's sudden fits and starts, its melancholia and unheralded leaps.' The author says that according to certain country tales, hares possess peculiar behavior in the face of fire, they return to smoke and flames rather than seeking escape. Yoshida casts herself as the hare in her photographs, entering the smoke and fire of her own passion in a search for personal transformation.

Conversations with a Dead Pig contains references to Macbeth's witches ('Pour in sow's blood, that hath eaten Her nine farrow; grease, that's sweaten From the murderer's gibbet throw Into the flame.' Act IV, Scene 1); and the pagan otherworldliness that haunts Celtic legends, carvings of Sheela-na-gigs, and Yeats' poetry; and Han period funerary reliefs of the Queen Mother of the West, presiding over the realm of the dead, with the hare pounding the elixir of immortality with mortar and pestle. Representing the multiplicity of feminine nature, the moon-hare uses the powers of nature to both give life and fertility, and to destroy. Like the moon, the feminine nature is light as well as dark.

Yoshida uses the subliminal echo of historical texts to guide herself and her viewers to places that patriarchy has obscured or co-opted for its own gain. The photographic mirror onto which these places are reflected exposes the unique viewpoint of a contemporary woman and her relationship with nature, as it is reconstructed through the fusion of elements both symbolic and real.