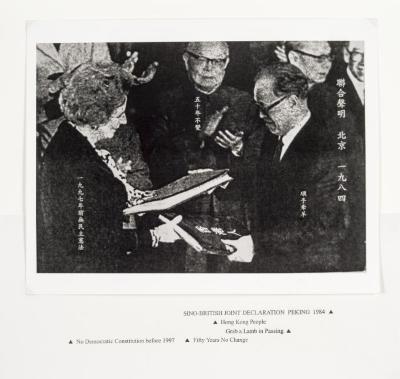 Recent critical discourse and artistic practices have produced many explorations into the meaning and use of photographs. This shift in the perception and practice of art photography positions photographs as representations of the ideas and powers that shape our world, as opposed to mirrors and windows that only describe and illuminate our physical environment. This awareness of the use and meaning of photographs has launched revisionist readings of photographs back to the invention of the medium, and has become a central theoretical tool for many contemporary artists working in photography.

In work from his series Hong Kong, 1997 artist Young K. combines text with photographs of seminal historical events to illuminate the cultural crunch of China in the 19th and 20th century. In 1997 Great Britian will relinquish sole governance of Hong Kong. In Hong Kong, 1997, Young K. presents the contradiction of communist China and capitalist Hong Kong coming together in a yin and yang ruling synthesis. In the piece titled Deng's Reform China 1978, Prime Minister Deng is flanked by two officials - one representing the west and one representing the east. In the lower corner of the image Young K. has placed the raised fist of an individual citizen in solitary protest. With this small addition to the image, Young K. invades the integrity of the original picture and throws it off balance. His addition of text within the picture tilts the balance further, both visually and contextually offering a critical reading of China's attempt to be one country with two systems.

In the piece titled Sino-British Joint Declaration Peking 1984 Margaret Thatcher and Zhao Ziyang exchange copies of the official declaration of Hong Kong's 'independence.' In the text written on this photograph Young K. positions this document to refer to the Hong Kong people and Zhao Ziyang's gesture of exchange as an opportunity to 'grab a lamb in passing.' Additional text that translates to 'No Democratic Constitution before 1997' and 'Fifty Years No Change' refers to agreements in the joint declaration that essentially will keep Hong Kong without democratic rule for the next fifty years.

In the piece titled Great Proletarian Cultural Revolution China 1966 a child sits in front of a temple destroyed by the Red Brigade. Written in Chinese characters in a speech balloon coming from the child's mouth is the phrase 'it's a plot.' This phrase reflects an attitude that Young K. has expressed in his previous work. He has written, 'I wonder why the world seems so miserable, as though it was completely hopeless. It stays in a state of imperfection, doesn't really move toward any ideal. This is simply depressing.....I simply document what I would like to see happening in the world, here and now, making the impossible visible.'

The small gesture of adding the phrase 'it's a plot' to this picture of destruction and despair can be seen as the prospect of 'making the impossible visible' that Young K. offers for his native China. The phrase signals awareness and perhaps a declaration of hope that the future of China can be determined by the strength and voice of each individual.

Young K. lives in New York City. He participated in our Artist-in-Residence program in August, 1994.