Charles Biasiny-Rivera
Be Strong and Do Not Betray Your Soul, 1992 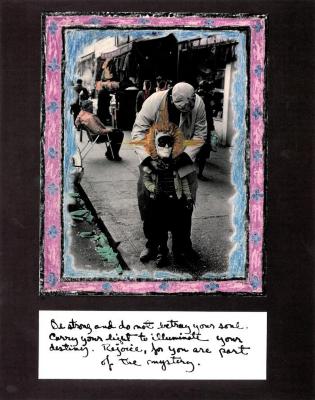 During his residency at Light Work in January 1992, Charles Biasiny-Rivera began work on a series combining photography, text and drawing. With this new work Biasiny-Rivera adds a dramatic visual layer to his previous work where he found refuge in the spirit of Latin culture in crisp emotional black and white photographs of daily life. While his emotional center remains located in the heart of the Hispanic communities of Puerto Rico and New York City, the changes in his new work are centered on his delivery and emphasis.

In this new work Biasiny-Rivera creates a framework for his subjects patterned after the traditional design and intention of holy cards that commemorate the lives of saints. Maintaining the power and reverence of the holy cards, Biasiny-Rivera anoints young kids on the street, parents with their children, and strangers posing for portraits. The elaborate borders he creates around his subjects form a concrete and personal field of connection that circles them in a halo of playful colors and intuitive designs.

Biasiny-Rivera's hand work is often emphasized by his inventive search for just the right color. In a several images from the series, he rubbed coffee from his morning cup onto the photographs creating a color that feels so alive we imagine we could recognize it in the dark. With a final touch of personal reverence, Biasiny-Rivera hand writes original inscriptions below the embellished photographs. Reminiscent of a monk's script on sacred documents the ecclesiastic tone of the text completes the process of celebration and elevation he began on the street with his camera among the crowds.


Charles Biasiny-Rivera began his career as a photographer during the Korean war where he served with the military. He later became an apprentice to photographer Sir Cecil Beaton and went on to work in magazine and fashion photography during the sixties and seventies. His early creative work was humanistic in nature, largely inspired by Robert Frank, Roy De Carava and W. Eugene Smith. He believes that his experience as a photographer documenting street theatre around the world through a grant from the Rockefeller Foundation, profoundly influenced his life and work.

While traveling throughout India, Bali and South America, he became aware of the powerful messages emanating from the cultures of those countries. He continues to be intensely and personally drawn to the island culture of Puerto Rico, birthplace of his parents, which has greatly influenced his most recent series.

Biasiny-Rivera was the co-founder of En Foco, Inc, an artist-run photography center in the Bronx. He served as the organization's executive director until he retired in 2005. He was born in New York City and is a graduate of the State University of New York / Empire State College, earning a B.A. in Photography and Latin American Literature and Culture (1989). He received two New York Foundation for the Arts Individual Artist Fellowships in Photography (1992 and again in 2000) and an Artist in Residence award from Light Work, Syracuse, New York (1992).

He has been awarded the Bellagio Fellowship from the Rockefeller Foundation, for an artist residency in Italy (1993); the recipient of two Mid Atlantic Arts Foundation critic residency awards through the Maryland Art Place, Baltimore, Maryland (1991) and the Delaware Center for the Contemporary Arts, Wilmington, Delaware (1993). He co-curated the American Voices exhibition, which opened at Fotofest (Houston, Texas, 1996) and traveled to the Smithsonian Institution (Washington D.C., 1997).