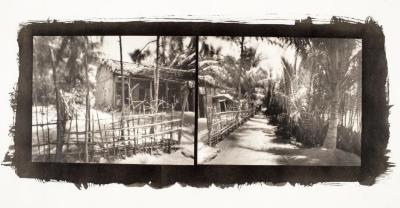 Craig Barber works with homemade pinhole cameras constructed out of cardboard and tape, and his finished negatives are paired together as platinum prints which can take over an hour to expose in the darkroom. Using this homemade apparatus and method of printing, Craig Barber has photographed scenes from his travels in the United States and abroad, but a recent trip to Thailand and Vietnam had a much more profound significance for the artist than his earlier projects. In Vietnam, Barber spent most of his time traveling and photographing in the central region between Da Nang and Chu Lai, the same area in which he was stationed as a combat marine from April 1966 to December 1967.

For Barber, traveling meant the backroads not outlined in the backpackers guidebook. Many of the villages in which Barber stayed and photographed had not been regularly visited by Americans since the war. His travels brought him to areas virtually undeveloped and unchanged from the time he was a soldier. He developed a close bond with the people he met, and was often invited into their homes as a guest. Most of Barbers photographs show the unchanged landscape and villages, and in one village he met a woman who claimed to remember him from twenty-eight years earlier.

In the image 'There is a Future', the two halves of this diptych show a straw house, which has been partially rebuilt in brick. This slow renovation continues as its owners have the time and resources to produce more bricks, one at a time. Barber's photographs show this gradual move from the Vietnam he knew before and the Vietnam he was rediscovering. His panoramic images evoke the look of nineteenth century photographs of city scenes, giving the illusion of desertion due to the slow exposures of the camera, which do not record the images of people in motion. Since his exposures could last several minutes, the people of the villages were seldom seen in his photographs, although they were often present behind the camera with the photographer.

In the image 'He Just Stood There', one young boy endured the length of Barber's exposure, and the film records his movements as a ghost-like presence in the frame. The sense of isolation in Barber's photographs echo the quiet isolation he, as well as other soldiers, felt. He writes, 'The lack of discernible change is jarring at times. More than once, as I have wandered the small hamlets searching for images, I have felt on patrol. The weight of my pack feeling all too familiar and the tripod feeling as a weapon. I am not in the midst of flashbacks, I am in complete control of my faculties yet deja vu runs deep within my veins while winding my way along narrow dirt paths and bamboo groves, scattered hooches and barking dogs, water buffalo and rice paddies, fishing villages and coconut trees; it would be impossible NOT to remember events.'

The Vietnam War separated the United States down the lines of those who supported American involvement and those who opposed it. For the Vietnamese people, some welcomed American soldiers as their guardians, while others saw the American presence as an occupying force and threat to their way of life. Michael Herr, an American journalist for the London Observer wrote, 'All the wrong people remember Vietnam. I think all the people who remember it should forget it, and all the people who forgot it should remember it.' Ironically, as real-estate developers explore the potential of turning Vietnam into the next major resort paradise with luxury hotels, Craig Barber finds solace in the unchanged people and land which stirs memories of the past, as they become intertwined with the experiences of the present. Barber's photographs show a slow transition of Vietnam as he reconciles the memories of the past, and like the process Barber employs to produce his images, it cannot be rushed along too rapidly.