Gary Nickard
Untitled from the series 'Eye of the Whale', 1995 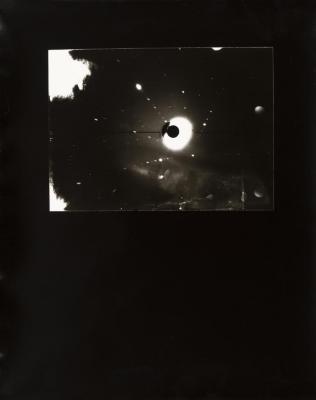 For nearly ten years, Gary Nickard has made objects and images that reveal a suspicious fascination toward science. He brings to his art a vast knowledge of data as well as theoretical concerns regarding the study of science. He has been especially interested in the ideas of the French philosopher Michel Foucalt who theorized that '...power subjugates knowledge and makes it serve its end...'

Nickard has expressed this questioning of how scientific statements are affected by external sources of power in both simple and complicated objects and images. In 1981 he appropriated illustrations of men in the midst of mysterious experiments that he found in scientific publications from the 1940s and 1950s. Selecting provocative images to reprint, he deleted the accompanying text and exhibited them, innocently piquing the viewer's curiosity. At the same time he suggests that perhaps a little fear is in order - especially the kind that results from the hindsight of fifty years.

Nickard's sophisticated fabrications of the later 1980s were metaphors for another type of relationship that he found evident in science - that between the less informed general public and a learned community. Through these works that combined scientific apparatus with slick materials such as copper sheets, Nickard warned the confident viewer that things are not always what they seem. While apparently complicated and certainly intriguing, the objects of the Dislocation series were also, seemingly purposeless.

Throughout these earlier efforts Nickard has always revealed a certain delight in the information he has gathered, and in the object he has produced. His suspicions and cynicism toward scientific research reflect a kind of general doubt from a generation informed by the impact of nuclear weapons, Agent Orange and the Love Canal. Yet Nickard's recent series of images, Till the End of the Night reveals a depth of cynicism not previously expressed. The series was conceived in the Autumn of 1994 when Nickard served as a care provider for his AIDS stricken brother.

The darkly Romantic title of the series is based on the texts that dominate the images; they are excerpts from a novel published in 1934 by Louis-Ferdinand Celine, entitled Journey to the End of the Night. It relates the thoughts and experiences of a disillusioned young doctor, desperately trying to help a patient suffering from Typhoid, as he visits the most knowledgeable 'experts' researching the disease, presumably to find a cure. Nickard describes the novel as a '...violently anti-social, scabrously nihilistic and hilarious satire...' that he found far too poignant and relevant to his own life throughout his brother's illness.

He was inspired not by the fascination with scientific research and peculiar information but by his own first hand experience attending a patient suffering from an incurable condition, while observing a medical community whose efforts were confounding and seemingly brutal. The brilliantly colored abstractions of the background in the work from the series form an equally disturbing association. They are taken from a set of glass lantern slides of details of metallurgical crystal structures created by Meret Kronberg, a physicist associated with the Manhattan Project, who later committed suicide. The images are deceptively beautiful and framed with a border reminiscent of a 1950s television monitor, adding to their seductive and innocent appearance. It is almost as if Nickard's previous suspicions, warnings and cynicism have been finally confirmed. Is it skepticism, or gratefulness that research nurtures in those who are at its mercy?


Gary Nickard lives in Buffalo, NY and NYC. He participated in our Artist-in-Residence program from March 1-30, 1995.

Cheryl Brutvan is a senior curator at the Albright-Knox Art Gallery in Buffalo, NY.