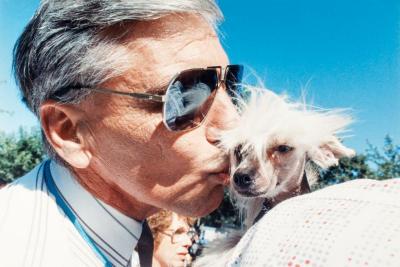 When Czechoslovakian filmmaker and photographer Miso Suchy came to America he did not speak English, placing him in a difficult position to fully comprehend his new environment. One of Suchy's first jobs in this country was as a professional dog handler's assistant. As a metaphor for his own first experiences in the country Suchy found much in common with the dog, another mute creature which learns and adapts to its circumstances by observation and instinct. After the artist 'quit his promising career as a dog handler's assistant,' he continued attending the dog shows, but this time as a photographer and a filmmaker. Suchy had made a number of films in his native Czechoslovakia, and in 1992 made his first film in America, About Dogs and People - Expedition Civilized Canine. The film spanned a period of three months as he and his film crew traveled across the country observing the relationships between dogs and humans in contemporary American society. Suchy blends image, gesture, sound and melody into a unique documentary film which pushes the boundary of the traditional narrative film. Mimicking the dog's incessantly shifting attention span, the film cuts to and fro to scenes of the dog as the beloved family pet, as an abandoned stray in the urban streets and the city pound, and as a potential champion in the dog show arena.

In addition to the film About Dogs and People, Suchy conceived a separate photographic series, Dog Shows - Observations of a Weekend Ritual of American Popular Culture, which examines the extravagant and sometimes surreal world of the professional dog show circuit. Suchy« works behind the scenes and in the center stage following the dogs through this elaborate process of primping and posturing as they become the reluctant and sometimes unwilling participants in this contest which pits owner against owner, rather than canine against canine. The nature of professional dog show extols the belief that breeding is everything, and there are indeed high class and lower class dogs. In the dog show arena the dog can be seen as an aristocratic symbol of superiority for the owner, or as a champion, which like a thoroughbred would command a great price for sale or stud. As Suchy documents the relationships between the dogs and their owners, the division between pet and property can become a gray area. One owner embraces their pet with pride and compassion like a cherished offspring; whereas other dogs are seen caged until they are called to perform for the judges.

Miso Suchy looks at these events with curiosity and wonder, rather than criticism or critique, and from his photographs we sense that, like the dogs in the show, he is just trying to comprehend what is going on here. According to Suchy, 'Dogs can't speak but they can tell a lot about the society in which they live.'

Miso Suchy lives in Rochester, NY and participated in our Artist-In-Residence program in November, 1994.