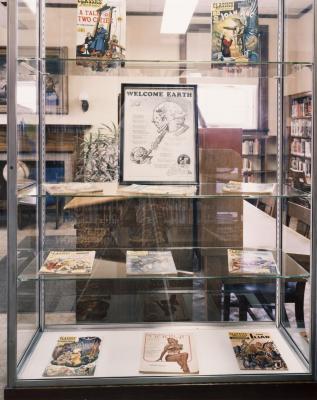 Roger Mertin, master of the understated eloquence of vernacular photography, died in Rochester, NY on May 7, 2001. For the past several years Roger had been commuting between Rochester and Saint Paul, Minnesota where he lived with his partner Elizabeth Ihrig.

Roger participated in more programs at Light Work than any other artist. He was one of our first visiting artists and an exhibition of his work opened our Robert B. Menschel Photography Gallery in October 1985. Roger received several grants from the New York State Council on the Arts through Light Work and his work has been published in numerous issues of Contact Sheet. Roger was a dedicated correspondent and our files are thick with post cards and letters that he steadily sent us over the years. Always scripted carefully with a fountain pen, Roger's correspondence conveyed the impression of a task taken seriously. He respected the art of letter writing and with every piece of mail we received from him, not matter how trivial the message, we felt some of that respect reflected back on us simply by receiving his attention.

Rogers reputation as an important photographer was firmly in place at Light Work when I was hired in 1980. The one and only poster we made to advertise our Artist-in-Residence program features a picture Roger made while participating in the program in 1977. The picture is from his series of basketball hoops, and this particular image was made at the outskirts of a suburban neighborhood north of Syracuse. The basketball hoop in the center of the picture is the only thing that looks alive, sporting three large arrows on the backboard pointing towards the center of the basket and the object of the game. Roger was most comfortable when working on a series whether it was basketball hoops, Christmas trees, or public libraries. Phil Block and Tom Bryan, Light Work's founders, were strong supporters of Roger's work and they often explained that Roger worked in series because it was a good excuse to stop the car and make a picture. Roger was always in the car and he was always making pictures. Every time that we met for lunch or dinner in Syracuse Roger always connected it to making a picture along the way--a stop at the Solvay Public Library, a visit to a restaurant owner to convince her to pose for a picture as the Statue of Liberty, or maybe one more look at the apple trees in bloom just south of Syracuse.

Although Roger worked primarily with an 8x10 view camera and photographed things out in the world the way that he found them--he wasn't a documentary photographer in the tradition that his tools and techniques suggest. Most of Roger's work had a strong conceptual base but his sense of humor and the importance he placed on small details prevented his work from being caught in a static theoretical framework. Roger used a large format camera because it could emphasize small details that he wanted to make sure we noticed. When someone missed an important detail Roger could become incredulous to the point of exhaustion. He once showed me a review of one of his exhibitions where the critic had talked about his pictures in relationship to blues music. As Roger was explaining this to me his voice got higher and higher as he said 'blues music, blues music, I said the blues, the color blue--that's what I was looking at.'

Rogers pictures, more than any other artist, got me to pay attention, to really understand how to look at a picture and understand what I was seeing. I had the pleasure of working with Roger on several exhibitions, publications, and commissioned projects over the past twenty-one years and I join many others who will miss the optimism and grace of his pictures and his company.

Roger Mertin was one our first visiting artists in 1977, his work was featured in Contact Sheet #1, and his work opened the Menschel Gallery in 1985. Over the past twenty years Mertin has crafted subtle photographs of Central New York and other regions in the country with a decidedly 'central' attitude. Mertin has worked on several thematic series from basketball hoops to his current interest in libraries. While he might be drawn to his subjects for a number of reasons, we sense that his need for a subject is just an excuse to stop the car, and the challenge of making a picture
Within less than a decade of Rochester's founding, its citizens were taking themselves to photographers' studios to have their portraits made. Some came dressed as you see its present citizens in these portraits by Roger Mertin, taken at celebrations of the city's 150th year, where people in antique clothes, imitating historical figures, mingled with crowds in modern dress. And it is the mystery and charm of Mertin's pictures that, no matter what their dress, his sitters pose alike and no pose looks out of place.

Our ancestors shared an idea of how they were to appear in photographs: Posture: erect. Clothes: their best, and linking their wearers to their time, place and class – in a word, historical. There to be stared at by the photographer (representative of all who might some day look at the portrait), they would affect dignity and civility. If an emotion were to disturb that mask it would be a  solemn one, the weight of existence being more general than mirth, and solemnity being easier than a smile to hold for several seconds. Besides, a smile, especially if it's held long, can easily appear to caricaturize itself if it's stilled at the wrong moment by the camera.

Each generation receives its images of the photographed self from the photographs of its forebears, and modifies that image accordingly to its needs and its sense of its difference from the past. It is this persistence and these modifications of a common notion of what we look like in pictures that Mertin captures here. His photographs lead us directly past conventional pose to those aspects of bearing, of style, of emotions displayed in public, and (in the group portraits) of ways of expressing relationships that separate these people from the past, while the pose connects them to it.

There is a broader range of emotions we recall from 19th century portraits. There are many more smiles. Are we a happier people? Perhaps Mertin's subjects simply know that today's fast exposures can capture the brief peak of gladness in a smile and thus treat smiles as kindlier. At any rate, they entrust their smiles and other fragile emotional expressions to Mertin. And Mertin handles them well, as he handles all the broad and fine sameness and differences chronicled here.

Thus Mertin documents something so elusive, abstract and inward that one would have thought it impossible to record: a citizenry's vivid memory –its picture–of, and its identification with the inhabitants of its city's past.

It is the same with Mertin's photography. To the earlier photographers, the sitters' pose, costume and emotion were givens and belonged to portraiture itself. They were all that he had to deal with, and they were affixed as the dimensions of his photographic plate. His task –and it was no easy one– was three-fold. First, to create a likeness (a report). Second, to make of pose and costume pleasing and –with luck and skill– elegant and surprising shapes within the frame, so that with each successive portrait his fixed frame would be freshly composed. For in this way he created the illusion that each successive sitter–each singularity– demanded a uniquely crafted picture, a unique response from the photographer. (in staying true to his craft he paradoxically became an expert flatterer.) And third, to watch and wait for the moment when the social mask and the inner person were both in contention on a face. And all of this had to be done without the photographer showing his hand, so that each picture might seem at once the presence of the sitter and a report.

This too Mertin has done, finding his modern version of the plain style, crafting and making accessible his inner picture of what an honest photograph should look like.


Included with the portraits in the exhibition are 18 color photographs that record the still lives and decorations surrounding Rochester's Sesquicentennial Celebration. In these images we see Mertin's interpretation of our history as something we must constantly reconsider. His respect for his subjects in these pictures, and the people who created them, gives us the chance to understand their meaning as cultural artifact and appreciate things as they are for their immanent beauty.

Roger Mertin lives in Rochester, NY and is currently on the faculty of the University of Rochester. He has exhibited and published his photographs widely and his work is represented in the collections of the Art Institute of Chicago, the National Gallery of Canada, the Museum of Modern Art in New York, and in numerous university and private collections. In 1974 he received a Guggenheim Fellowship in Photography, and has been similarly honored by CAPS (1974) and the National Endowment for the Arts (1976). Martin also received an artist-in-residence grant from Light Work in 1977 and a Sponsored Project Grant from the New York State Council on the Arts in 1984