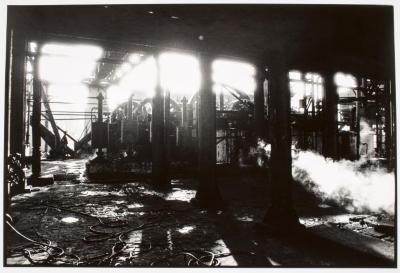 For a more recent CV or bio please visit the artist's website, www.romaisphotos.com/wp/

Renown photographer and sociologist Lewis Hine wrote, 'Whether it be a painting or a photograph, the picture is a symbol that brings one immediately into close touch with reality...In fact, it is often more effective than reality would have been, because, in the picture, the nonessential and conflicting interests have been eliminated.' During the first half of the twentieth century Lewis Hine's photographic images of working class America both informed and inspired social change in this country. Hine used photography as means of presenting visual evidence, but he also employed a very keen and calculated artistic sensibility in his photographs which better conveyed his message.

In 1992, when photographing in Northeast region of Brazil, Miriam Romais first visited a sugar refinery where she was immediately drawn to the images and story she saw unfold before her. In the Paraiba Sugar series she began a photographic expose on the Brazilian sugar cane industry and its workers. In the states of Pernambuco and Paraiba sugar is the primary industry, which has been on a steady decline due to decreased sales to the United States and other foreign markets. This combined with government restrictions and the failure of the refineries to modernize their operations makes for a very uncertain future for the area. The Usina Santa Rita refinery, produces brown sugar (acucar demerara) for export and distilled alcohol. By law the distilled alcohol produced at Usina Santa Rita can only be sold to the government, who in turn purchase only 10% of the refinery's output.

The refinery at Paraiba is in poor shape, and the physical working conditions are very harsh. Workers at the Usina Santa Rita refinery work 12 hour shifts and their average pay is about $40 US dollars per month. The sight of a child working on the line is not uncommon. The photograph Young Man Surveying Gears bares an uncanny similarity to those photographs produced by Lewis Hine of child laborers in the textile mills which Hine made as a staff photographer for the National Child Labor Committee. Hine's photographs helped to bring about laws in the United States which prevented children from working in factories. With that in mind it is ironic that today the US depends so heavily on goods imported from countries who actively use child laborers in their factories.

The photographs of Miriam Romais pay a fitting homage to the work of Lewis Hine, Margaret Bourke-White, Alexander Rodchenko and other photographers of the early 20th century who focused their cameras on the working classes of their nations, creating very stylized artistic representations which glorified the worker in the factory. In the Paraiba Sugar series, Romais, as a social documentary photographer, draws attention to the conditions which exist in the Brazilian sugar refineries, and presents us with an account of the people who work in them. However it is the artist's own compassion and respect for these people who lives are affected by this refinery that may push the boundaries of objective detachment, but for Romais it allows her the ability to present her subjects with a degree of personal dignity they are seldom granted.

Miriam Romais has been with En Foco as managing director since 1992, and became executive director and Nueva Luz editor in November of 2005. Her work can be viewed on her website at www.romaisphotos.com
Miriam Romais Exhaust, Itaipú, Brazil, 2010 Archival Pigment Print miriam@romaisphotos.com www.romaisphotos.com This series reflects my continued fascination with massive modern machinery used to create food or sustain life. Itaipú, the world’s largest operational hydroelectric plant in terms of power generation, is nestled on the border of Brazil with Paraguay. Five miles wide and 65 stories high, it harnesses the flow of the Paraná River, with each of its 20 turbines exposed to 160 tons of water per second. 16 Miriam Romais is a photographer, curator, and Executive Director of En Foco, Inc, a non-profit organization that nurtures and supports photographers of diverse cultures. She has served on many photography panels throughout the U.S.; her personal work has been awarded several grants and residencies, with exhibition at venues such as the Smithsonian Institution; the Museum of the City of New York; El Museo del Barrio; the Los Angeles County Museum of Natural History; and many others. Romais was co-chair of the 2010 SPE national conference in Philadelphia, titled Facing Diversity: Leveling the Playing Field in the Photographic Arts.
A Just Image