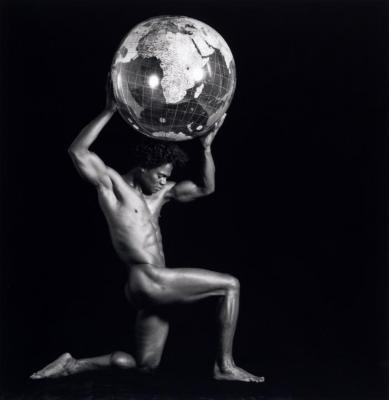 For a more recent CV or bio please visit the artist's website, http://www.reneecox.org/

One of the most important and popularized paleoanthropoligical finds of the twentieth century was credited to Mary and Louis Leakey's discovery of humanoid fossils in the Olduvai Gorge in Tanzania in 1959. This discovery showed that our early human ancestors probably hunted and foraged for food on the continent of Africa long before the rest of the world was inhabited by people. Also, this discovery meant that quite possibly the first sentient beings were black, thus creating a special place of world-wide stature for people of African descent. This reasoning never took hold, and as it turns out, Louis Leakey got most of the credit even though Leakey's wife Mary made the most important finds among the 400 fossils they uncovered.

While many of us might consider science to be an impartial system for the discovery and explanation of facts, the circumstances that surround the Leakey's work in the Olduvai Gorge make it clear that scientific discoveries are often reflected through the same filters of power, gender, and race that affect and control many aspects of our lives outside of the realm of scientific discovery. When facts don't or can't explain mysteries or answer questions, myths are created to provide belief systems that establish order and maintain power.

In her recent photographic work, Renee Cox questions accepted belief systems and challenges influential myths by depicting black people in roles where they have been excluded, or more precisely, just never considered. Even though the Leakey's discoveries might make Cox's rendition of a black Adam and Eve a more plausible myth to explain the origin of the human species, Cox pushes further in these photographs to question Eve's temptation of Adam and the resulting misery caused to humankind as a result of her weakness.

Cox presents Adam and Eve in separate photographs, but shows them equal in every respect, as they both possess the forbidden fruit. The traditional story has Eve tempting Adam, but Cox has given them both equal opportunity for damnation. By going back to the beginning and claiming equal roles for men and women, Cox questions the mythology that has relegated women to the role of evil seductress, an image that has rationalized their subjugation to men throughout history. At the same time that these images claim equal roles for men and women, they also position a black man and a black woman as equally responsible for original sin and the loss of Eden.

There is always a risk when mixing religion with politics, but then as Cox suggests in her depiction of the first couple, if Adam and Eve had taken the fruit together and shown a little solidarity they could have made a better case for remaining in paradise. Legends, myths, and stories often ‘embody cultural ideas by giving expression to deep, commonly felt emotions.' 1 By questioning the origins of pervasive and elementary parables, the photographs of Renee Cox ask us to evaluate how gender and race have defined basic cultural expressions, emotions, and practices.