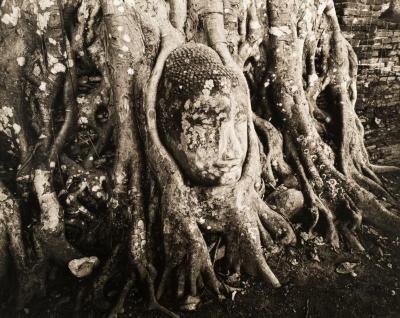 There are ample connections in Linda Connor's photographs between the corporeal and the spiritual, and even the title of this exhibition suggests such a link. The images in this exhibition were made in seventeen different countries over a seventeen-year period, and the remote location of these places invest the work with a sense of adventure, while the photographs describe a feeling of exchange and connection.

In her portraits we can see a directness and consent that Connor established with her subjects during brief visits, while in other images of ancient sites and sacred places, light streaks across the picture plane recalling visitations of a heavenly sort. The movement of Connor's physical journeys can also be viewed as a metaphor for how her work moves across different genres of photography, never easily categorized but never far removed from the traditions of landscape photography. Connor has welcomed many influences to shape the work included in this exhibition, and just as poetry might start out as a structured sonnet and evolve into a stream of consciousness, her work honors a tradition by breaking its rules.

When Connor began traveling to make pictures with her 8 x 10 view camera, one of the first things she realized was the absence of women represented in the cannon of landscape photography. Sarcastically Connor suggested that we title the exhibition A 'Broad' Abroad to question and emphasize this fact. In looking at the history of landscape photography we find that, not only has the genre been defined primarily by men, but landscape photography has shaped our understanding of nature.

From the work of William Henry Jackson to Ansel Adams, landscape photography has described the natural world as one devoid of humans, a pristine place of open spaces, majestic views, and wilderness. More recently the work of Richard Misrach, Robert Dawson and others continue to define this tradition by describing the destructive intrusion of humans on this pristine palette. Rebecca Solnit, in an essay in the Marin Review in 1987, describes how Connor's approach to the landscape differs from this tradition when she writes, 'Underlying this segregated view of the world is a kind of pessimism about the place of Homo Sapiens in the world: work like Connor's implies a very different attitude. In her photographs, the earth appears not as some fresh, newly discovered wilderness but as an ancient, long-inhabited place where nature and culture are neither opposites or opponents.'

While Connor's approach to the landscape might have been informed by a feminist point of view she also acknowledges the influence of her teachers Harry Callahan and Aaron Siskind, fellow student Emmet Gowin and photographers Frederick Sommer, and Paul Caponigro who were also expanding the definition of landscape photography. Perhaps it was inevitable that photographers would begin to expand their interpretation of the landscape because even the definition of the word encourages different perspectives.

As a noun landscape means 'The branch of art dealing with the depiction of natural scenery' and as a verb landscape means, 'To adorn or improve grounds artistically as a profession.' The photographs in this exhibition acknowledge that we exist in a place that is bigger than the boundaries of geography. The sacred sites, poetic structures, and scenes of daily life in Connor's photographs are described with a sense of that larger existence, and look as if they were made outside of the time frame of progress.

In her photographs nature is not just vast, open, overpowering spaces, but a force that comes alive in the details of a twisted tree trunk, the movement of the stars across the night sky, and in the simple daily chore of washing food. Her images become affirming statements about possibilities and potential, that critique our destructive practices without ever showing a scared, ravaged, or polluted vista. In order to make all of the photographs in this exhibition Connor has left home with a destination in mind. By so eloquently and intelligently expanding the definition of landscape photography, she has returned from those visits with images of people and places that describe a timeless continuum of nature, civilization, and faith.