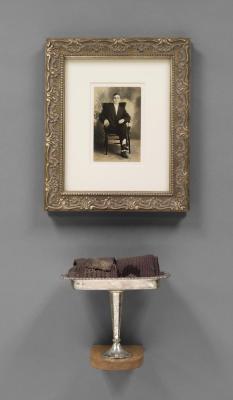 Liz Birkholz courageously tackles the problems of female essentialism and the unity of women’s experience head on - areas condemned by many of the strongest feminist women artists of the generation before her. She saunters right into that forbidden territory and comes back with her own conclusions about why its subtleties are important. Like Sandra Orgel (Ironing, 1972) and Judy Chicago (Dinner Party, 1974-79) before her, she initializes her metaphors in objects raditionally associated with women’s lives: ironing boards, table ware, needlework, combining these with found amateur snapshots, a vernacular genre that has also served as a gender sorting device in North American culture.

It is tempting to assume that the gender issues Birkholz explores have been put behind us, and the presence of the old photographs in this work would seem to support this. But women who are free of the effects of these issues are a very small group indeed, and some of them are kidding themselves. Unlike her more polemical peers in this exploration, Birkholz is not content with aiming her art only at the men who don’t get that there is a problem. Like Karen Finley in Moral History, 1994, (and others like her) Birkholz complicates the issue by introducing subtle layers of complicity on the part of women. Moral History is the large glass covered table spread with demeaning depictions, mostly photographs, of women from across the board of American culture. Finley has written captions of her own on the glass, for example: “There’s nothing quite like a moving woman” across one of Muybridge's female animal locations.

Birkholz’s feminism functions at its best in the realm of the stain. In one of her strongest new pieces, Suitable Remedies, 1996, five formal portraits of men are mounted with delicate crocheted corners on a piece of damask. Under each is a stain indicated by text over the images - either tea or coffee. On each stain is the name of a potential remedy for removal. The stains have not been removed. On the other side of a chair back also mounted on the damask is a portrait of a woman with no stains or text. A piece of crochet work is draped from the chair in a gesture that is both sexual and neutral, qualities it shares with the stains. Various questions of control are raised by the piece in a not entirely serious way.

Birkholz attributes her vitality as an artist and her conceptual skills to her membership in a tight and supportive group of graduate students at Arizona State University form 1989 to 1993, that included Nancy Fewkes, Don Leddick, Mark Woods, Martina Shenal, among others. She also acknowledges the inspiration of Bill Jenkins’ eclectic teaching concoction of semiotics, social history and art. But out of all of this she has synthesized her own unique ability to wittily manipulate and weave the flow of information from objects and photographs, recognizing that the release of meaning from each is quite different.

Rod Slemmons is a curator and teacher who lives in Seattle, Washington.

Liz Birkholz lives in Seattle, Washington and participated in our Artist-in-Residence program from April 1-30, 1996.