Gavin Lee
from series 'Fragments, from the Meaning of Memories', 1994 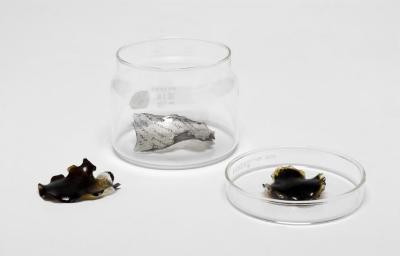 searching the horizon
of past and present

discovering the country
the 'peaceful country' within


Reflected in the work of Gavin Lee there is an ongoing journey of discovery of the self and the ancestral through the collective experiences and memories found in personal and familial archives. In the series Fragments Gavin Lee combines images, letters, and memorabilia from his travels both in the US and China. Fragments of these collected images are printed onto Liquid Light photographic emulsion which are suspended in glycerin, and displayed in small scientific specimen dishes for detailed scrutiny. The fragmented images float as a transparent membrane on the liquid surface becoming a metaphor for memories which are scattered across an ocean of time and experience.

Gavin Lee's current work in progress, Concerning George, examines the past of his great-grandfather George Lim Fong. Until recently, Lee knew little about his great-grandfather other than he was a Chinese immigrant who wrote poetry; however, something which was not openly discussed by his family, was that his great-grandfather spent five years in San Quentin prison for the attempted murder of a Chinese government official. Fascinated by this aspect of his great-grandfather's past, Lee began to collect stories and letters passed down through his family. Eventually he expanded his search to included newspaper accounts of the assassination attempt, and court and prison records from the archives of Alameda county, and the state of California. His research revealed that in 1910 George Lim Fong was arrested and sent to prison for the attempted assassination of prince Tsai Suun, the head of the Imperial Chinese Naval Commission, and member of the royal family. As a member of the Young China Association political party, which supported the soon to be established Chinese Republic, George Fong's role as would be assassin was determined by the draw of a lot. In the image Ivar Johnson, the court report which reveals George Fong's affiliation with the Young China Association is overlaid on top of the same type of revolver which George Fong was given to complete the task assigned to him. The image Would Be combines the 1910 newspaper account of the assassination attempt with the police mug shot of George Fong. Using the computer as a collaging tool, Lee began to create relationships between images and historical accounts in order to distill a greater understanding of the past of his great-grandfather. Lee will complete this project with the construction a reading room which will present all of the images and volumes of records concerning George.

In his mixed media constructions Gavin Lee merges the photographic image with personal and familial archives using metal, fiberglass, wood, canvas, and glass. This synthesis of material and image forms sculptural objects which reveal the permanent and ephemeral nature of memories and experience, those which are cast in metal, and those which dissolve when touched.

Gavin Lee lives in Los Angeles and participated in our Artist-in-Residence program in May 1994.