Pamela Shields
Trickster Child', from the series Nitssapani, My Blood, 1997 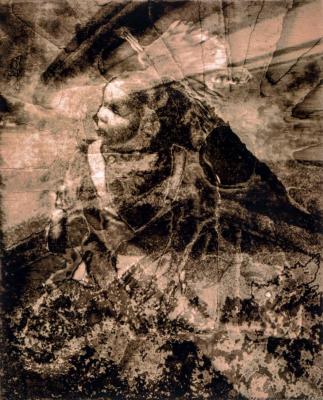 Pamela Shields, born in Salt Lake City, Utah was brought up and educated in Alberta, Canada before returning to the United States as an adult. Much of Shields' work looks at how memory, for indigenous peoples, is effected by shifting and multiple locations of existence and experience , simultaneously personal, communal, cultural, historical and geo-political and all held within a sphere of land-based ideologies and spiritual beliefs. Shields' own experiences as a dual citizen of both Canada and the United States, and former boarding school student has made such relationships distinctly evident.

Shifting and multiple locations of existence and experience for indigenous peoples are most often the result of forced removals from ancestral homelands, forced land allotments, reduction in reservation lands and relocation of reservation-based people to cities. The many forms of memory are reflective of and influenced by indigenous land-based world views and ideologies and the persistent marginalization of indigenous peoples by dominant Western society.

Shields employs a palette of red, green and gold, and layers of photographic images of trains, buildings, and objects with archival portraits of indigenous people to sublimely portray the complex relationship between memory and location.

Her series of digitized images combines archaeology and repatriation as she literally searches museum archives for photographs of her people, the Kanai from Canada and the United States. In the photo-archives at the Smithsonian's National Museum of the American Indian in the Bronx, Shields finds familiar faces and bodies, yet the names and histories of each are unknown thereby displacing any memory of these people.

Shields reclaims the nameless portraits of Kanai people and alters each to create hagiographic Native portraits. Her mending treatment is poignantly apparent in two separate works of one portrait of the same Kanai woman. In Innst (sister) we see a pixelated portrait of the woman. Shields inserts her own kinship to this woman by adding a photo-copy image of her own hand on the shoulder of the woman.

In her diptych Bird Woman, Shields moves even closer to remedy this woman's unknown identity and displaced existence. Shields feels particularly close to this woman pictured standing bare-chested with her hands at her sides. The woman wears a beaded buckskin skirt and adornments in her hair. Shields identifies with the Kanai woman because the woman appears to be close to Shields own age, and they both share a slight small-framed body.

Shields shelters the woman by lending her own personal memories to this lone woman. In the left side of diptych the woman appears twice. Once off-center standing in a courtyard of a brick building and then again as a close-up of the woman's face in the lower left corner. The woman's shifting presence enhances the ephemeral mood of the diptych. Shields selected the image of the building and courtyard as it reminded her of the boarding school she attended in Canada. The right side of the diptych is a close-up of the same courtyard. This time we are able to see a bird that is barely visible in the scene from the left side. The contrast of the bird which symbolizes an indigenous natural world, and that of a brick building and barren courtyard, and a deliberate symbol for dominant society, creates a haunting and disturbing tension. The title Bird Woman refers to Bird Woman Falls in Montana, a place on the reservation where many of Shields' relatives live and where she herself spends her summers. Through Bird Woman, Shields creates a sphere of an indigenous presence by connecting the links of history, culture, land, and time between herself and the woman.

Shields' photographic works reunite indigenous peoples , left nameless and wistful in archival photographs , with their ancestral homelands and Kanai family , as one relative reaching out to another.