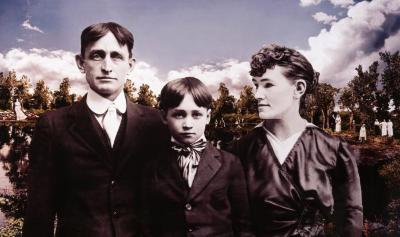 Martina Lopez grew up in Seattle, WA. She received a BFA degree from the University of Washington in Seattle and an MFA degree from the School of the Art Institute of Chicago. Lopez has been working with the 19th-century portrait, landscape, and the digital media since 1985. Her interest in the electronic environment lies in the believability of the photograph and malleability of the digital medium. For the last several years, she has been interested in the idea of the digital one of a kind image. Lopez’s artwork is featured in such publications as Naomi Rosenblum's A World History of Photography; The Digital Eye, by Sylvia Wolf, Director of the Henry Art Gallery and former curator of photography at the Whitney Museum and the Art Institute of Chicago, and in a book by Mary Warner Marien, Professor Emerita at Syracuse University and the Batza Family Professor at Colgate University. Warner Marien’s book, 100 Ideas That Changed Photography, discusses the most influential ideas in photography’s history from the Daguerreotype to current technologies. Most recently, Lopez’s artwork is featured in The Photography History and Theory Reader, a comprehensive collection of twenty-first-century essays on photography Published by Routledge and Liz Wells.

Lopez has received several grants including a National Endowment for the Arts Visual Arts Photography Fellowship. Her work is in many private and public collections such as the Art Institute of Chicago, The Smithsonian American Art Museum in Washington, DC and the Center for Creative Photography in Tucson, Arizona. Lopez has been teaching at the University of Notre Dame since 1993.

Although she was trained in photography, first at the University of Washington, Seattle, and then at the School of the Art Institute, Chicago-based artist Martina Lopez has not made a photographic print as part of her art in over nine years. In fact, she would probably never set foot in a darkroom were it not for her job teaching photography and digital imaging at the University of Notre Dame, Indiana. And yet photography is central to her art. All of the raw materials for her work are photographs and the final object she exhibits is a photograph. The key ingredient in her creative process, however, is digital-imaging technology.

Lopez began making digital images in 1986, shortly after the death of her father. One of eight children born of first-generation Mexican American parents, Lopez turned to her family's photo albums to review her past. As the snapshots triggered her memories, she was struck by how the pictures told a different story from what she remembered. This, in turn, made her wonder what the past would look like if she reconstructed it with these pictures. She envisioned cutting and pasting, adding her own memories and desires. 'I began to use the computer to create images that chronicled my family history,' Lopez explains. 'I then started to incorporate images from beyond my personal album as a way to create a collective history, one that would allow people to bring their own memories to my work.'

Now in her early thirties, Lopez makes her art exclusively using computer-imaging technology. Careful not to get distracted by all the things a computer can do, Lopez works with a thorough understanding of technique, but technology remains at the service of her creative ideas. Lopez stays focused on her ideas in part because she already has an image in her head close to a final form before she sits down to work. Once at the computer, she scans pictures she has taken of clouds and landscapes and turn-of-the-century studio-portraits that she finds in second-hand stores and flea markets. She then collages the photographic elements, often altering their color or scale. After she has arrived at a final composition, Lopez has a four-by-five-inch transparency made from the computer disk. Using this transparency, a lab produces large-scale Cibachrome prints.

The end results are eerie, desolate landscapes in which children pose with stilted apprehension and romance is overshadowed by death. When asked to talk about her work, Lopez attributes the haunting loneliness of her pieces to her personal losses and to the sadness she feels for the people in her pictures who once lived but now exist only in photographs. Ultimately, however, Lopez's digital composites transcend her own narrative. In them, we recognize our mortality and are reminded that no matter how we try to stave off the advance of time with advances in technology (including the kind that gave rise to Lopez's art), all of us will become like the characters in her tableaux. Pictures of us will provide future generations with the only visual reference to memory and we, too, will be absent but for our presence in photographs.