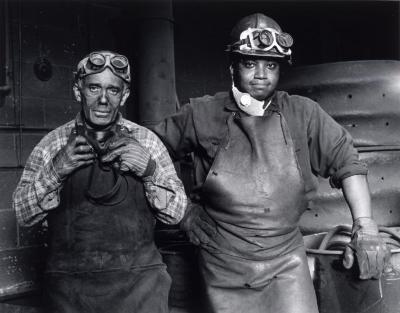 For James Williams his ongoing series Steeltown is more than just his current project, it is an insiders look into the lives of steelworkers who trade sweat for wages. Williams' inside knowledge of the steel industry comes from his father's 40 years as a steelworker and his own 14 years of experience working in the industry.

In the communities where Williams has photographed it is not unusual for the steel industry to have supported several generations of the same family. The steel industry, particularly in North America, has been greatly affected by changing methods of production, stricter environmental regulations, free trade agreements, corporate greed, and mismanagement. The steel industry has in some regions experienced new growth, however in older established steel producing regions the industry has shown a steep decline, employing half of its original work force. Steel plants which have supported communities for generations are now reducing their work force, moving to new locations for cheaper labor, or closing entirely. Williams presents the steel industry in these communities at this transitional point, with images of closed factories, or those working at a greatly reduced capacity, as well as photographs of the individuals affected.

Williams' installations consist of large photo murals of factory buildings that are overlaid with individual portraits of workers. By positioning the portraits on top of the factory buildings Williams puts the workers first and creates vast mosaics that allude to the fragmented state of the steel industry. The mosaics are held together by the portraits of the workers. The portraits have a directness that Williams is able to achieve as someone from inside their community. The subjects of the photographs do not put on any airs about having their portraits taken -- awkwardly posturing for the camera to conceal their discomfort over being photographed by an outsider -- they are confident and at ease, as if they are momentarily pausing to talk with one of their coworkers. Because of his background, Williams is able to achieve a level of rapport with his subjects that would be difficult for another photographer to accomplish in the same situation. Even the photographs of workers taken in Steeltown, the Mexico Chapter share that same connection, unencumbered by the barrier of language. Accompanying these photo installations, are videotaped interviews of steelworkers, their employers, and union representatives. Williams sees these taped interviews and portraits as a entry into this industry from the perspective of the worker, further empowering them with a voice to express their own their fears of loss, and hopes that the industry will find the means to rebound.

Steeltown is an ongoing body of work. To date Williams has photographed communities in Southern Ontario, Western New York, and Mexico, and most recently in Germany. The installations for Steeltown have been presented in a number of alternative spaces and non-traditional exhibition sites like union halls in many of the same cities where these photographs were taken. In this series Williams gives his subjects the vehicle to inform a larger audience of their own concerns. By increasing awareness these communities may find the strength and support to rebuild or reinvent themselves, a task which will once again fall on the shoulders of the laborers who built Steeltown.