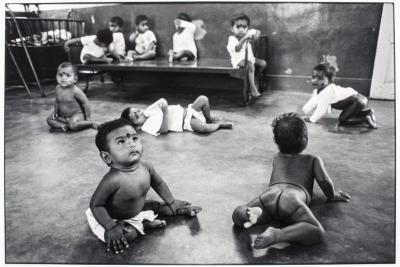 For a more recent CV or bio please visit the artist's website, www.zanabriski.com/

In a country where goddesses are worshiped by millions, most girls in India are born into a life of deprivation: often fed less than boys, denied an education, and married as children. Many fetuses are aborted simply because they are female. In Tamil Nadu, a southern Indian state, women's groups are battling the tradition in some communities of female infanticide - the killing of newborn girls - where there is already a girl or two in the family. Some mothers who agree to this practice say they are acting not only to lessen financial hardship, especially to avoid the dowry, but also to save the girls from the pain of growing up female.

With this succinct description Zana Briski introduces work from the series reproduced here, 'To Be Born a Girl: Female Infanticide in India'. The title alone is enough to take your breath away, and when the work was presented at a recent New York State Council on the Arts panel meeting, it was enough to silence twelve seasoned art professionals for an uncomfortably long period of time. What other human response could there be to this work that wouldn't include shock, sadness, and disbelief? Is there some level of cultural understanding that we could get to that would provide a more palatable insight into this practice? Do we hold it up as an example of the madness possible in a staunchly patriarchal society? Do we find some comfort in knowing that other women in India are working to change the attitudes and practices of others?

There have been many photographic essays that have brought to light the tragedies of human events, from W. Eugene Smith's work on the effects of mercury poisoning in Minematta, Japan, to Gene Richards's essay chronicling the life of crack addicts in New York. Now we have CNN and the Internet bringing us live coverage of shootings, accidents, and guided missile attacks. The visceral images that accompany wars, car wrecks, domestic violence, and revenge are often quickly digested with the hope that the guilty will be punished, lost loved ones will be properly mourned, and order will be eventually restored.

We live with that hope because without it the burden would be too wrenching for us to continue, or so it would seem. When video cameras are everywhere bringing us the latest story as it happens, it might seem that essays like Zana Briski's have gone the way of the manual typewriter. But cable and network news programs overlay dramatic music, introduce well-groomed announcers, display impressive graphics, offer endless interpretations by numerous experts, and always cut to commercials.

Zana Briski's photographs offer us no such reprieve. They are relentlessly static and painfully descriptive of troubling and inescapable facts. Her selection of the subject is not without purpose as she admits that she is drawn to photographing issues that she cares about deeply, particularly concerning the lives of women. But her images are carefully considered, rarely over-dramatic, and never sensational. As difficult as the subject of infanticide may be, Briski allows us to consider the meaning and impact of her images with the same amount of passion and commitment with which they were made.

Zana Briski lives in New York City and participated in Light Work's Artist-in-Residence program from August 15 to September 15, 1999. Her work can be viewed at http://www.zanabriski.com/.