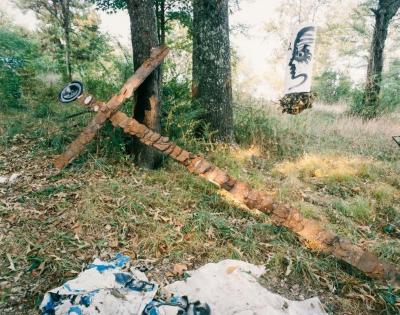 Elijah Gowin is a storyteller. He seeks his narrative in a variety of landscapes, but is deeply attracted to environments created by self-taught artists. These are spaces that have developed and grown over many years, possessing layers of information, revealing truths about the maker and his world, and sometimes ours, not found otherwise. Gowin has had the opportunity to see these spaces grow and flourish and, as is the case with Howard Finster's Paradise Garden and Lonnie Holley's One Acre of Art, change dramatically or disappear completely. With the camera, Gowin is able to describe and document, but more importantly he isolates themes and possible narratives as well as moments of revelation within these deeply layered, sometimes chaotic installations that offer insight into the work of the artist.

These five photographs were taken during the final days before Birmingham artist Lonnie Holley's environment was lost to the bulldozer. Created over a 20-year period, Holley's home and garden fell in the path of airport expansion and were razed. He has relocated south of Birmingham and is making art again, but the tragic loss of that original space will haunt not only him, but also everyone who ever carefully threaded their way through that densely cluttered environment discovering art works of great power and poetry. The photographs capture Holley's despair and foretell loss of the environment which had flooded from his fertile mind and obsessively prolific hand.

Holley began making art in the late seventies, carving sculptures from a sandstone-like material left as a by-product of the steel industry. His early carvings were simple, but he was soon creating complex sculptures of historical figures, biblical stories, and intricate tableaux describing man's relationship to man, to God, and to the universe. By the mid-eighties, Holley was painting. Concurrently he had been filling his yard with both sandstone sculpture and a growing maze of cast off objects-old kitchen appliances, junked cars, fabric, bottles, aluminum-which eventually were transformed into assemblages, each carrying a profound message from Holley.

His early work was deeply spiritual and spoke to issues of family, love, and eternal connection through God. By the late eighties and early nineties a variety of social issues was being expressed, especially in the found object assemblages. Holley's concerns were drug abuse, homelessness, race relations, and the increasingly powerful role of technology in our lives-topics easily addressed in the human detritus he found around him.

Gowin has an appreciation, even a reverence, for the things that might ordinarily get thrown away. As he says, 'It is a reverence understood by the itemization and placement of the objects. Things from the past, carefully arranged, have a significance for the present.' Holley, speaking of his former yard, said, 'The average person can't understand this. But a lot of people say, 'Goodnight. You made me think.' If you look at all this thrown away material, I took it and made it into something else. It was already created. It was already at point A. When you throw it away, I'll take it from A to the next level.'

By the time Holley had to move, the environment had become more of a bunker. Vandals were destroying sculptures, stealing copper wire, and taking shots at the house. African American Art Sign and Hungry Man's Cross may illustrate the isolation felt by Holley as he was physically cut off from the world and felt deserted by many in the community.

Mother is an especially poignant image. Lonnie's wife was sent to prison in 1987 and the children only see her on infrequent visits to Ohio. However, Mother - symbolizing birth, life, the power to heal - is at the heart of so much of Lonnie's art. Rising from the debris is this gigantic figure spreading her arms protectively over the children who may already be fading from this world.

The mystery and ambiguity Gowin creates in these images is reminiscent of a walk through Lonnie Holley's yard, yet they are Gowin's work. Through his selection and his intervention, he has both documented and revealed truths of the special place.

Elijah Gowin lives in Chattanooga, Tennessee and participated in Light Work's Artist-in-Residence program from May 1 to 30, 1998.

Gail Andrews Trechsel is the director of the Birmingham Museum of Art in Birmingham, Alabama.