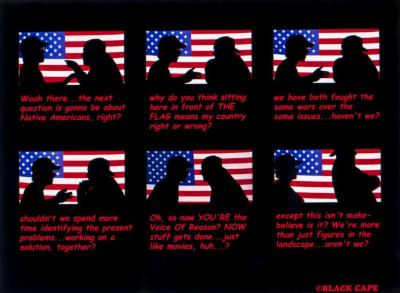 Woah there... the next question is gonna be about Native Americans, right?
why do you thinkn sitting here in front of THE FLAG means my country right or wrong?
we have both fought the same wars over the same issues... haven't we?
shouldn't we spend more time identifying the present problems... working on a solution, together?
Oh so now YOU'RE the Voice Of Reason? NOW stuff gets done... just like movies, huh...?
except this isn't make-believe is it? We're more than just figures in the landscape... aren't we?

The day after Dave Lewis arrived from London to begin his month-long residency at Light Work, Princess Diana was killed in a car crash in Paris. The central theme of much of Lewis' previous work has been the exploration of his experience and perception of being black and British. That Lewis was outside of Britain and missing the unified national mourning of one of its most loved citizens was a poignant exclamation to his explorations of what it means to be black in Britain.

The feeling of being outside of British society is deeply felt by Lewis and many other blacks in British society. Unlike the United States where the term black refers only to African-Americans, in Britain the term black includes individuals of African, Caribbean, and South Asian origin. Autograph, a photography organization in London that sponsored Lewis' residency at Light Work, does not mince words when describing the exclusion of blacks from British society. In describing their goals as an organization Autograph states,

'In the past few decades discussion and debate has led to public awareness of the need for a Black Photography Centre in Britain. The dominant, modernist tradition has set the agenda for the kind of photography that has been seen in our galleries, books, and magazines.

This euro-centric definition combined with the exclusion of Blacks from all areas related to the study, art and commerce of photography has denied black photographers both access/support and an audience/market for their work. Autograph the Association of Black Photographers, a national organisation, has been established to create a forum for photographers in Britain, who are of African, Caribbean and South Asian origin, and also to educate and inform their audience.'

Dave Lewis has family roots in the Caribbean island of Grenada, and family members in Britain and the United States. His residency at Light Work was his longest visit to the US apart from short family visits. Even though Lewis grew up in England he was never made to feel that he was British. In the United States his English cultural bearings, including his accent, set him apart from African-Americans, and his infrequent visits to Grenada left him feeling apart from his Caribbean roots. This cross-cultural identity questioning has been the basis of his work for a number of years, and during his residency at Light Work he continued to explore the complexity of those questions.

At Light Work Lewis worked on several different projects, from portraits of Caribbean Students at Syracuse University that included text written by the students about their experience in the United States, to the computer generated works included in this issue. The question that Lewis literally and figuratively asks in the works reproduced here is, 'Would I be wrong in saying that my skin colour is still the defining factor of my identity?' In one triptych Lewis stands in front of a large American flag as he leans on a wooden structure that both supports his weight and confines his movements. In the text below each picture Lewis describes his 'European, Grenadian and English selves.' Each description is different, opening up the possibility for many interpretations of his personal identity, but the image of Lewis remains constant -- boxed in and confined to a small square that is filled by his shirtless torso displaying the color of his skin.

Lewis continues his question in the second piece reproduced here in the form of a dialogue between two individuals who are silhouetted against an American flag. In this piece the individuals are engaged in a dialogue that begins with Lewis' central question of skin colour defining identity and then goes on to suggest how cultural differences might be mediated. In the last panel of text in this piece one of the characters asks 'We're more than just figures in the landscape...aren't we?' In order to be more than figures in the landscape, it seems that the cultural landscape itself must change, and in this work Lewis puts this challenge to the cultural landscape of Britain, Europe, and the United States.