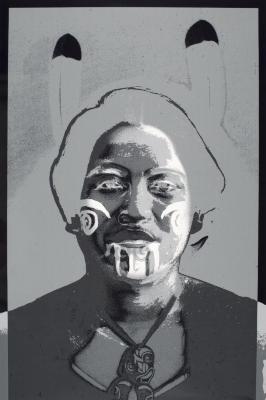 Hulleah Tsinhnahjinnie was born in Phoenix, Arizona in 1954. She was then relocated to the Navajo reservation in 1966. Her artwork shows many of the stereotypes regarding Native Americans in the United States as well as her strong will and pride in her culture. In 1975 she attended the Institute of American Indian Art in Santa Fe, New Mexico, and in 1978 she studied at the California College of Arts and Crafts in Oakland where she received her B.F.A. in painting with a minor in photography in 1981. Today, she resides in the Bay Area where she continues to rise up in the art world. Tsinhnahjinnie participated in Light Work’s Artist-in-Residence Program in 1995 and February 1999.

Hulleah J. Tsinhnahjinnie was born into a visually rich home created by her artist father Andrew V. Tsinhnahjinnie, his artist friends of the 's, her mother's Oklahoma Creek/Seminole family, her family's home on the Navajo Reservation and the desert skies of Arizona. Tsinhnahjinnie's childhood was one of friends and family visiting and traveling between family homes in the Southwest with brothers, sisters, aunts, and cousins. She was reared in a Native affirming home centered around art and family. With her entry into the Arizona public school system Tsinhnahjinnie began her own encounter with a white racist society that did not value or recognize her existence as an indigenous child. She has refused the influence of Western society to consider anyone or thing of indigenous culture to be dead or fated to death, and has instead employed photography to depict an indigenous presence.

With Adobe Photoshop Tsinhnahjinnie revisited her 'Metropolitan Indian Series' and current photo-documentation of indigenous events in the San Francisco Bay Area and has either enhanced or replaced the original background with selected backgrounds to dramatize the presence and existence of indigenous peoples. From her 'Metropolitan Indian Series' she has created 'Idelia, ', an image of a Navajo and Nez Perce woman wearing a buckskin dress seated in a background of purple sky filled with clouds. Idelia sits like a th century Native Madonna or 'Mona Lisa', her beauty and power reflected in the presence of the moon behind her right shoulder. Tsinhnahjinnie's representations of Native women divert from popularized representations of Native women such as Pocahontas or Sacajewa in that Idelia does not play into Western society's reasoning for the subjugation and exploitation of indigenous people, but instead reflects an indigenous and empowering self-love.

Tsinhnahjinnie's 'Visiting El Norte Series' and 'Toto Dancing for a Clear Sky' is a multi-layered visitation of indigenous presence and power contrasted against Western architectured presence and power. She points to this difference of understanding of presence and power through the West's appetite for commodification and exploitation, and indigenous peoples beliefs in empowerment through the spiritual realm. Tsinhnahjinnie depicts this through the changing size of the 'Deer People' who can mimic the dimensionality of what the West builds and sells as well as through California Pomo Dancers whose dancing and singing recognize and call for spiritual power. Hulleah Tsinhnahjinnie's images are powerful images that proclaim an indigenous omnipresence and existence in a society that has now begun to feel and fear its own mortality.