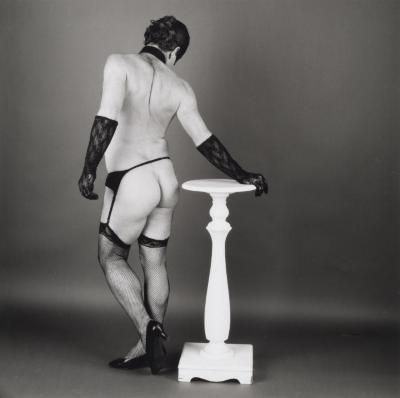 For a more recent CV or bio please visit the artist's website, https://en.wikipedia.org/wiki/Ajamu_X

Let us bless the freak, for in the natural order of things, the ape would never have become man had not a freak appeared in the family.' Vladimir Nabokov.

Ajamu, a self-taught photographer based in London, does not mince words when he describes his role as a photographer and the intent of his work. In preparation for this issue of Contact Sheet, Ajamu provided us with an artist statement that announced, 'Being a black queer photographer in England is akin to being a latter day 'freak,'' and that his mission is 'to create challenging and innovative work that cuts through the bullshit surrounding the unsatisfactory way that those of us with culturally forbidden lives and desires are represented (or hidden) within British society.'

On May 1, 1999, the Associated Press reported that the White Wolves, a racist group that threatened black legislators, claimed responsibility for bombing a gay pub in the heart of London's restaurant district killing 2 people and injuring more than 70. The following day police arrested a suspect who claimed he was not affiliated with the White Wolves but was suspected of other bomb attacks on Britain's ethnic minorities. We need to look no further than the headlines with news from Kosovo, to the New York City Police Department, to Columbine High School in Littleton, Colorado, to see that the inability and unwillingness to accept or respect cultural differences is a worldwide destructive and devastating human failing. No one artist or individual can answer the complex questions of why people turn against one another. We can only hope that through discussion and dialogue we can begin to move towards a remedy for the disease of hate.

Most productive discussions and dialogues begin with questions, and this is the method of inquiry that Ajamu employs in his series of work titled Anti-bodies. During his residency at Light Work, Ajamu re-photographed images from the Becker Collection in the Special Collections Department of Syracuse University's Bird Library. The Becker collection includes extensive holdings of photographs by Charles D. Eisenman, a sideshow photographer active in New York City in the 1870s and 1880s. Eisenman's photographs of 'freaks' (a term that has gradually begun to disappear from carnivals and state fair exhibits) includes bearded women, Siamese twins, albinos, midgets, and giants. From the collection Ajamu selected several photographs including two bearded women, Priscilla and Madame Meyers, and then photographed himself to mimic the pose and presentation of these two nineteenth-century 'curiosities.'

By linking his own image to those made nearly 100 years before, he emphasizes the persistence with which societies insist on crafting a definition of what a 'normal' person should be by setting apart those individuals that do not conform to the majority, and thus dominate culture. For the most part those individuals who fall outside of the majority's definition of 'normal' have borne the brunt of ridicule, torture, attack, and sometimes murder. But in the case of the Columbine High School massacre, this cycle of retribution and revenge can circle around with equally deadly results. As the pundits search for reasons from MTV, to video games, to wardrobe choices to explain the horror in Colorado, the questions that Ajamu puts forth in his work offer a more rational and basic explanation. If as societies we insist on persecuting others to justify a majority view of morals, self-importance, righteousness, and real estate, then we will have learned nothing from the lessons of history.

Ajamu lives in London England and participated in Light Work's Artist-in-Residence program in November 1998. Autograph: The Association of Black Photographers, located in London, has made it possible for several British photographers, including Ajamu, to participate in our residency program.