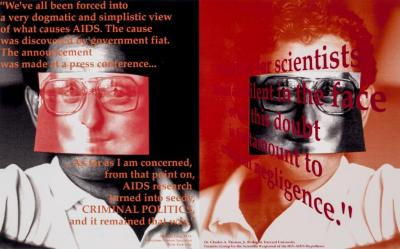 We've all been forced into a very dogmatic and simplistic view of what causes AIDS. The cause waas discovered by government fiat. The announcement was made at a press conference... As far as I am concerned, from that point on, AIDS research turned into seedy CRIMINAL POLITICS, and it remained that way." Michael Lang, M.D. Infectious Disease Specialist New York City

"I feel that for scientists to remain silent in the face of all this doubt is tantamount to criminal negligence."   Dr. Charles A. Thomas, Jr. Biologist, Harvard University founder, Group for the Scientific Reapraisal of the HIV-AIDS Hypothesis.

As an artist he has exhibited his work, site-specific installations, and performances, throughout the country since 1972. Originally trained as a figurative/representational painter most of the work has focused primarily – though not exclusively, on the body, specifically the male body, gender, sexuality, space manipulation, mark-making, and AIDS. He has worked, and continues to work, with a variety of materials formats and genres including: painting, drawing, sculpture, performance, theater, dance, glass, collage, text, and computer imaging, and now birdhouses.

As a curator he has developed numerous exhibitions and events in a wide range of subjects and media (including hooked rugs; ceramics; architecture; fashion, drawing, installation, photography, painting, sculpture, and AIDS) on both coasts and throughout New York State, but he is probably best known as “that guy who did a miniature golf course created by artists for Artists Space.” Exhibits he has created have been presented at the University Art Museum, Berkeley, CA; Queens Museum, NY; Newark Museum, NJ; The Munson Williams Proctor Institute, Utica, NY; Jamestown Community College, NY; Artists Space and the New York Transit Museum, both in NY, among others.

As an arts administrator and museum professional he has been an exhibit designer/preparator/fabricator for the University Art Museum, Berkeley, California, and the Staten Island Children’s Museum; curator for the Queens Museum; director of the Visual Artists Program for the New York State Council on the Arts – for 10 years; artistic and executive director of Artists Space, and deputy director of the New York Transit Museum. He’s also lectured extensively on a variety of subjects, participated in various workshops with both school age children and adults, and has served on numerous panels throughout the country.

As a gay man he’s been out since 1970 and was diagnosed HIV+ in 1989. He has been asymptomatic with an undetectable viral load for many years. He is single and leading a happy, productive life.

The breadth of human sexuality stretches between distant poles of desire, so our understanding of passion needs to be informed by an elastic perception.

In a recent series of digital collages Carlos Gutierrez-Solana attempts to wrench the dialogue about homosexuality from the insensitivity and ignorance that many heterosexuals have tried to cast it in for years. The starting point for the series was a survey published in the New York Times titled Turning the Tables, A Reverse Questionnaire. The questionnaire was originally published in Working it Out, The Newsletter for Gay and Lesbian Employment Issues. The article in the Times reported that, 'This questionnaire is used by several companies in sensitivity training workshops to provide discussion. Questions like those often posed to gays and lesbians have been given a twist so that they apply to heterosexuals.' Questions from the series include, 'Is it possible that heterosexuality is just a phase you may grow out of?' and 'Considering the menace of hunger and overpopulation, can the human race survive if everyone were heterosexual?'

Gutierrez-Solana combines the quotes from the questionnaire with putative male homosexual images to underscore the stupidity and insensitivity of the questions when they are directed at gay men and women. Gutierrez-Solana appropriated the images in the series from a variety of 'erotic' magazines. Many of the original magazines published from the 50s to the 90s comically masquerade as 'fitness' and 'bodybuilding' publications. The combination of these closeted images with the absurd text from the questionnaire creates a comic confusion about male homosexuality. This confusion serves to equalize any judgments about what is right or wrong, normal or anomalous, and shifts our attention to the clear and present issue of individual rights and freedoms through the understanding and acceptance of difference.

Carlos Gutierrez-Solana lives in New York City and participated in our Artist-in-Residence program from April 15 - May 15, 1994.