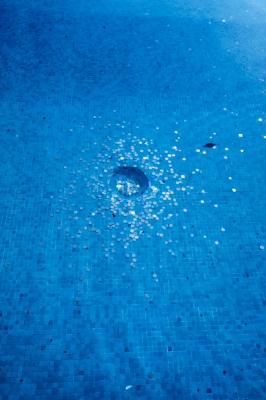 For a more recent CV or bio please visit the artist's website, www.yuhirai.com

When Yu Hirai participated in Light Work's Artist-in-Residence program in September 1999 it was her first visit to the United States. Born in Tokyo in 1963, she left Japan to study in Brussels in 1984. After moving to Barcelona for a short period of time, she settled in Berlin from 1995 to 1999 and now splits her time between Berlin and Mexico City with occasional visits back to Japan.

All of these travels have made her a virtual resident of the world, conversant in several languages, and well adapted to different surroundings, cultures, and climates. But after living in Europe for fifteen years she realized she would never become a European, and at the same time she also developed the conviction that she would never be able to re-adapt to Japanese society.

It is not surprising that she settled on Berlin as the city of her European residency given that until recently Berlin was a city divided into distinct East and West zones. The idea of finding an undivided emotional home is an undercurrent of much of Hirai's work, that began to develop and mature while she was living in Berlin.

It is also not surprising that an artist who is looking for an emotional home would explore personal passions as opposed to clear definitions in her work. Much of the work that Hirai has produced over the past several years, including the new work she produced during her residency at Light Work, is designed to play out like visual poems over gallery walls or on the printed page. With her use of bold colors and simple designs, it is not hard to imagine Hirai arranging her work like a poet might design a verse through a slow but intense process of contemplation and elegant reasoning.

The process of contemplation and reasoning that is at the center of Hirai's work is for the most part rooted in a purely emotional response to form, color, and movement. One device that she employs on a regular basis, the inclusion of her feet within the frame of the image, is described quite succinctly by Yuko Hasegawa, curator of the Setagaya Art Museum, 'The point of contact between Hirai and the world is always shifting…Hirai's works are records of her points of contact, from moment to moment.' In the series of five images reproduced here Hirai begins with an image that records one of those points of contact. The image of flowers set on concrete appears to be some kind of memorial or remembrance. Her bare feet at the edge of the frame creates a sense of ceremony, encouraging us to view the scene as a special or reverent personal place.

Hirai relies mainly on color in the two-paired images of a wishing well and a swirling dancer. Commenting about her use of color, Herve Chandès, curator of the Foundation Cartier pour l'art Contemporain, writes, 'For her, each of these colours is associated with a feeling, just as in collective unconscious, red is passion, orange-yellow is cruelty and selfishness, blue is sadness, solitude or at times, freedom. Arranged in rhythmical sequences, Hirai's pictures are like a tale that is left for the viewer to invent.'

The last pairing of images reproduced here were made in Syracuse and are a bit more playful than the others. Hirai arrived in Syracuse and was taken to visit the New York State Fair the very next day. It is hard to imagine a more surreal event for a first time visitor than the midway at the State Fair, and her closely cropped image of one of the carnival rides describes both the energy and bursts of color that make these rides such an attraction. This image is paired with a very minimalist rendering of sneakers dangling from a utility wire against a brilliant blue sky. We had to explain the mischief involved in such an unusual situation, but after spending a month on a university campus and witnessing fraternity and sorority rushes, the dangling sneakers eventually made more sense than her initial impression.

Throughout her work Hirai has been attracted to the small uneventful happenings of daily life. She works very intuitively, concentrating on images that impress themselves on her-filtering some out and working with others. Through this calm and centered visual language Hirai is able to describe a distinct sense of place while at the same time envisioning no specific place at all-which seems like a fitting outcome for an artist who prefers the comforts of an emotional home.