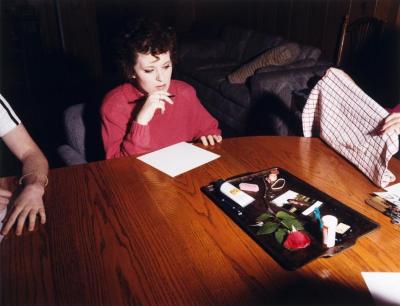 In my life as a photographer I have always watched and recorded as life happened to other people. On March 24, 1997, numerous kicks to my head changed everything for me. No longer just an observer taking pictures as people flail about in the waters of personal disaster, I have been pushed into those waters. My subjects are now my peers.
While taking pictures in a neighborhood for my newspaper job, I was attacked, beaten, and kicked, nearly to death by a mob. Eight long months later six males were arrested; a number of them belonged to a local street gang, the Oak Park Bloods. Two of them were thirteen-years old at the time of the attack.

The beginning of the attack exists only in hazy fragments in my mind. I remember a man I'd never seen before jumping out of a car and confronting me. But after my shock and utter surprise at that first blow he struck, the only memory I have is a flash of ringing kicks to my head. I have no memories of all the blood or the ambulance ride to the hospital. I have next to no memories of the week I spent in the hospital after that. The repeated kicks to my head had caused my brain to swell and damaged the part of it that controls my memory, as well as other cognitive functions.

As awareness slowly dawned on me, I found myself in a wheelchair at a quiet, pine-paneled institution in the country where I would live for the next three months, where I would begin my new life. It was Sierra Gates, a brain injury rehabilitation center where a handful of other people like me resided, all of our lives suddenly blown apart by fate. Here, some of us would begin to try to pull ourselves out of the darkness of loss of self; others were, perhaps, trapped there forever.

In April , I began visual, speech, and physical therapy at Sierra Gates. My left eye wandered in its socket. My short-term memory suffered so that I could not repeat five numbers back to my speech therapist. When my physical therapist asked me to balance on my left foot, it took all my strength and concentration to hold steady for just two seconds before falling toward a support. On top of it all, the healing rest my brain demanded had saddled me with a crushing fatigue.

An aide helped me bathe because I could not stand in the shower and was too confused to get the job done. I recognized my reflection in the mirror each morning, but the huge scabs and the stitches glaring from shaved patches in my hair meant nothing to me. Obviously, something terrible had happened, but I could not understand what it was, and, in fact, it did not really matter to me. All I could focus on was the present. I had lost the context for my life and felt as though the previous thirty-six years had been lived by somebody else.

The other people with me seemed much the same. Neil, a teacher, and Janice, a nurse's aide, got lost and could not find their own rooms in the house. Steve, who had run a multi-million dollar tomato-canning business as recently as February, now had trouble understanding his simple hourly therapy schedule. Bill, a menacing-looking, tattooed biker, had lost all control of the muscles in his right arm. Kim had lost her ability to stand, her speech, her recognition of her surroundings, her sense of self, her entire link with the world around her. None of us had any memory of our 'accident.' We were all disconnected from the biggest event of our lives. All of us needed to build new lives with whatever was left functioning in our brains.

One day I discovered that someone had brought my camera to me, so I began to take pictures. Photography for me, like walking, was a natural impulse, but I discovered that, like walking, it no longer felt the same. Organizing people and objects within a fixed frame to communicate an idea, difficult enough before my injury, seemed nearly impossible. Still, I felt compelled to try to use pictures to make sense of my confused new place in the world.

John Berger wrote in About Looking, 'With the loss of memory the continuities of meaning and judgement are also lost to us. The camera relieves us of the burden of memory...it surveys for us.' Making these pictures is beginning to help me organize my observations and feelings outside of my brain, where it seems no longer possible. I can see these thoughts as I hold them in my hand and it makes them real to me. Maybe the perspective I'm gaining might help other people understand the complete detachment and loneliness we all suffer. We have lost our closest companions, ourselves.

After all that has happened I am back to photographing life as it is happening to other people, but with a difference, we have been equalized. Their lives have become my life. The vacant look in the eyes of these people is the same one that I discovered staring back at me last year in my shaving mirror. I believe what the writer Nuruddin Farah said, 'A story has to be about someone else even if it is about the one telling it.'