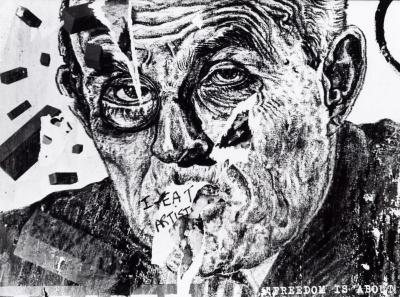 In the field of photography the terms photojournalism, documentary, and street photography may mean different things to different people, but in general they all describe a similar approach to picture making. Beuford Smith describes himself as a photojournalist perhaps because he began to make photographs at a time when that was the most common label for a photographer who would go out in the world and report back on what they thought was interesting, important, and worth remembering.

For over 30 years Smith has been going out and reporting back, and during his residency at Light Work in August and September 1999 he split his time between making new photographs and printing from a backlog of negatives. Syracuse doesn’t offer many choices to a photographer interested in capturing the activity of the street. Those who are interested eventually gravitate to the corner of Salina and Fayette Streets in the heart of downtown Syracuse. Light Work has been inviting artists to make new work in Syracuse since 1976 and this corner is arguably one of the most photographed urban intersections in the United States. Bruce Gilden, Dawoud Bey, Sy Rubin, Steven Hirsch, and Doug Muir are just a few of our past visiting artists who have made a photograph on this corner-a small curious footnote in contemporary photography.

Smith has two photographs reproduced here that were made on that corner. One picture catches the Salina and Fayette street sign slightly out of focus while a man, seemingly lost in his thoughts, is razor sharp in Smith’s field of view. It is a simple and melancholy moment that Smith has brought to life with a practiced eye and quick hand. The second image made on the corner is a complex collage of nuance and grace. Several layers of reflections, planes, and space all seem to intersect at once inside a sun-filled coffee shop. Smith, poised with his camera, casts a shadow on the window of the shop creating a center of calm within the reflections as he becomes both the subject and the creator of this contrasting, multilayered view of tranquility and action.

Another favorite spot for visiting artists is the New York State Fair. If they come during the 12-day run of the Fair that ends on Labor Day, the photographers who prowled Salina and Fayette Streets will find their way there. The Fair shares the same curious status as the corner of Salina and Fayette, and in 1976 Charles Gatewood, our very first Artist-in-Residence, made several ground breaking photographs at the Fair, which continue to be included among his very best work.

The two photographs reproduced here that Smith made at the State Fair are subtle yet deeply expressive portraits. In one image Smith again uses selective focus to visually draw his subject from the background of the image. The young woman in this picture is perfectly rendered and exhibits an expression that is nearly as complex as the Mona Lisa.

The success of the second portrait, of a young man, is also realized through the subject’s complex facial expression. This picture contains a riot of textures and patterns that bring out the vibrancy of the Fair while perfectly capturing the young man’s hip sense of style and fashion.

Many of the photographs that Smith made during his residency at Light Work echo the stance, sensibility, and signature that he has developed throughout his career. From his early days when he was the co-founder and chief photography editor of The Black Photographers Annual, through his participation in the legendary Kamoinge Workshop, and on to his current practice, Smith has remained committed to the simple ideal, ‘to photograph as truthfully and humanely as possible.’1 Whether you want to categorize him as a photojournalist, documentary or street photographer, what remains clear is that Beuford Smith has developed a very individual and recognizable style within a crowded field of like-minded photographers.