Deborah Bright
Pommel-Cantle' from the series 'Being and Riding', 1996 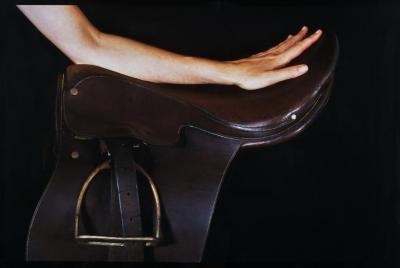 In the series Dream Girls, Bright places herself into the scene of classic Hollywood films of the 1940s and 1950s. Unlike the Untitled Film Stills of Cindy Sherman, where Sherman created imaginary scenes and characters, Bright takes identifiable moments on screen and transforms them. The presence of Bright's character in the photograph shifts the reading of the original scene by altering the interaction between the hero and heroine of the story. By inserting herself in the role of one of the existing actors, or by becoming a new character she draws the attention away from the male protagonist. In the book Stolen Glances: Lesbians Take Photographs, Bright speaks of her attraction to these female heroines which she developed as an adolescent watching these Hollywood films. For Bright these female characters who were strong, intelligent, witty, and who defied the female stereotypes of the time, served as role models and at the same time objects of desire and fantasy.

In the series Being and Riding Bright presents the viewer with a series of constructed studio images which allude to the fascination and desire between pre-adolescent girls and horses. For some young girls who's background provides them the financial means to attend riding camps, frequent stables, or girls who were raised on farms with horses in some cases outgrow their preoccupation with horses. But for most these desires only manifest themselves in the form of fantasy and make believe, which is echoed in the marketing of posters, books, scores of toys and collectable figurines which at times border on the ridiculous--purple horses with a shocking pink mane, rainbow colored ponies, unicorns, and so forth, all marketed solely to young girls. The paradox which exists between the innocence of a young girl’s fanatasy verses the common perception, or be it misconception, about girls, horses and sexuality.

In the series Being and Riding Bright does not hope to reveal any reason why this equestrian fixation exists, but she does draw attention to the construction and elevation of the obsession shared by “horse-girls.” The photograph Missy is both innocent and seductive in its stylized form of the back of a toy horse galloping into the distance of an artificial red backdrop, whereas the images Pommel Cantle and Domme create the illusion of eroticism and bondage, characterizing the breadth of emotions which might be associated with young girls and horses. Bright’s images mirror the fetish quality of the subject she is photographing. These images constructed and photographed in Bright's studio, digitally retouched, and finally printed as lush large scale Cibachrome prints, become as much of an object of desire as the ceramic horse figurine sitting on a shelf in a young girl's bedroom.

Deborah Bright lives in Cambridge Massachusetts and teaches photography and art history at Rhode Island School of Design, she participated in our Artist-in-Residence program in May 1996.