Bill Burns
from Book 'How to Help Animals Escape from a Degraded Habitat', 1997 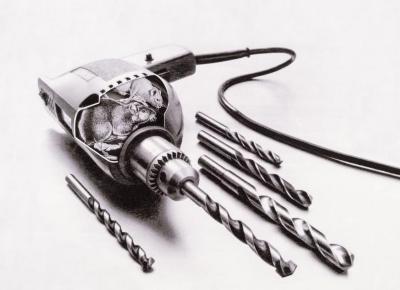 In his series of photographic works entitled How to Help Animals Escape from Natural History (1995-2001), Bill Burns explores human attitudes toward wild animals. Burns titles the large photographs (46 x 60") after the species portrayed, Moose, Whale, Buffalo, Kangaroo, and Bear. In the foreground of each image miniature replicas of the animals roam among faded and worn natural history books. A number of the books lie open to illustrations of the animals. These depictions show the animals as objects of study, and natural history is established as the place from which they are trying to escape. Defined by the Oxford English Dictionary as 'the study of animals or plants, especially as set forth for popular use,' natural history is presented in this series as an out-dated mode of investigation that restricts the common understanding of wildlife. The artist seems to suggest that natural history has reduced animals to symbols of the wild and the unknown in popular perception. At the same time, Burns implies that natural history as a field of study has sought to control wildlife through its accumulation of knowledge. Using the settings of the photographs, the artist further develops this interpretation of the relationship between humans and animals.

Soft-focus scenery depicting the natural habitat of each species of animal forms the backgrounds of these photographs. The scenes are reminiscent of the backdrops painted in dioramas at natural history museums. Functioning similarly in the photographs, as imagery that attempts to evoke the natural setting of the animals, the scenic views also call forth the intent of a diorama. A diorama's ability to teach depends on viewers accepting it as representing the authentic habitat of a species. Seeking to blur the boundaries between life and representation in order to teach an audience about an animal species, a diorama relies on the accuracy of the display, or at least its believability. Using the photographic medium, which has been itself engaged in debates of truth and transparency since its inception, the artist brings into play both the credibility and the make-believe of dioramic and photographic media. Like a diorama, these photographs are presented as windows onto a miniature view of the world. However, instead of indulging the viewer's desire for a coherent story and an accurate account, these photographs ask the spectator to question her or his relationship to the natural world. Whereas a diorama draws its authority from its location within a museum, the qualifications of the scientists who collected the specimens, and the curator responsible for constructing the display, these photographs question the authority of representations of wild animals in natural history. Burns is clearly less concerned with creating a life-like space within his works than he is with questioning our desire to see the world as a stable and coherent place.

In the miniaturized world of this photographic series there is only one person (heavily suited), and yet the influence of humans is pervasive. Toy vehicles, surreptitiously moving in to rescue the wild animals, are signs of human presence, as are the natural history books. The red helicopter that touches down on the pages of the weathered hardback symbolizes the human role in the animals' escape. The rescue of animals reminds the viewer of animal rights activism and movements to save and protect wild species from environmental degradation. Natural history is therefore, in a sense, presented as degraded territory from which the animals are trying to escape. However, their apparent release from confinement in a field of study leads to questions rather than answers. Are the animals better off once they have been rescued? Where do these toy vehicles take them? Is it really escape when animals are taken from one human-controlled domain to another? Rather than simply promoting animal rights, the artist seems more concerned with the human drive, however well-intentioned, to control the natural world. While this series of photographs invites us to enjoy the playful use of toy figures and consciously 'pretend' settings, it also asks us to question our motivations and our behavior toward nature.