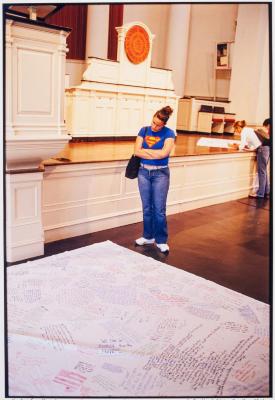 Doug Muir grew up in Syracuse , NY and lived in Berkeley, California for a number of years where he worked as a Union Steamfitter for the University of California. He participated in Light Work’s Artist-in-Residence program in 1981 and 2002.

Muir passed away in 2016 and is buried in Syracuse, NY

Portals of public transportation, lobbies of skyscrapers, grand stone stairways, parks and city sidewalks are places of transition. In his photographs Doug Muir has described these public places as final destinations fixed on an axis where the lines of curiosity and invention meet.

By design and sometimes by accident, the democracy of public spaces can celebrate our dignity or swallow our individuality. Along that edge of distinction between reward and restriction, Muir finds small gifts of visual excitement that he uses to soften even the most intimidating designs or to celebrate the best intentions of municipal benevolence.

In the center spread of this catalogue is a photograph Muir made in Columbus Circle in Syracuse, New York. Muir grew up in Syracuse and his familiarity with Columbus Circle spans several decades dating from an unruly adolescence in the Pioneer Housing Projects a few blocks from the Circle to his sporadic journeys back home to visit with his family. On a visit in 1985 the years of familiarity with Columbus Circle came together as he clicked his camera from the east side of the Circle looking west through the fountain toward the steps of the Cathedral of the Immaculate Conception. Partially obscured by the spray of the fountain but still radiant in their bright starched uniforms, several nurses stood lined up posing for a group portrait.

This photograph fulfills and transcends Muir's intimate history with the Circle. It is as if he had created that precise moment in time for the nurses to embellish the visual dynamics of the Circle and satisfy it's design as a gathering place and landmark.

Muir carries his sense of intimate observation to many settings designed for public interaction. In choosing the settings, Muir must be precise. Like building a house of cards, one jarring angle, one ambiguous moment or one wrong color and the familiar settings would be rendered as mundane as they often are in casual snapshots. Muir finds precision in his photographs by patiently observing and embracing the visual rhythm of life moving at it's own pace. Long after the moment has passed his images direct us to consider the delight of the visual choreography of our environment and our place in it.

Doug Muir lives in Berkeley, California where he works as a Union Steamfitter for the University of California. His work may be viewed at http://dougmuirphotography.com/.


Jeffrey Hoone (c) 1993
Doug Muir has an astonishing memory. He can recall a conversation he had in the mid-1950s on a street corner in Syracuse, NY almost as easily as one he had last week. He will remember the four or five friends and acquaintances involved in the conversation, and pepper his recollections with descriptions of the long-gone store they were standing in front of, as well as a few more remembered anecdotes about the neighborhood, the car he might have been driving, the name of his girlfriend, or just about any tangential detail that might cross his mind. When he is in the right mood, these recollections come often and run together in a free form of personal and historical narrative worthy of a stand-up routine on Broadway.

Muir grew up in a working class family in Syracuse in the 1940s and 50s, and along with his brothers Ron and Gary, followed his father in the building trades. He has supported himself and his photography by working for more than forty years as a steamfitter. Since 1967, he has lived in Berkeley and Marin County, CA finding work when he needs it at the massive oil refineries in Richmond, CA. He still has family in Syracuse, and comes back to visit at least once a year.

He participated in our residency program in 1981, and his work was featured in a solo exhibition in our Robert B. Menschel Photography Gallery in 1993. For most of his career, Muir has used a 35mm camera to make colorphotographs of urban environments across the country, producing impeccably crafted images that direct us to consider the delight of the visual choreography of ourenvironment--and our place in it.

Muir started taking pictures of his family when he was twelve. Over the past several years he has turned his interest to the history of his family, and created installations that include family photographs, furniture, and personal artifacts of the lives and times of his immediate family and friends. Last year, Muir participated in his second residency at Light Work, continuing his work of chronicling his family with snapshots. Photography and memory are closely linked through the snapshot. The snapshot aesthetic not only helped forge an identity for photography as a singular art form, it has made the medium the preserver of memories and important moments for most people in the middle, and on the fringes, of the industrialized world. With the casual snapshots Muircontinued to make of his family during his residency, and the more elaborate installations he has created centered around his family, he extends his personal memories out into the world as objects open to universal curiosity. Just as he relies on his memories to make anecdotes about his adolescence come alive, the power of the pictures reproduced here are expressed by their timeless quality of a simpler time recalled. Made one afternoon in the long shadows of autumn in Central New York, the pictures describe a certain place, but they also seem to be lost in time.

All of the pictures reproduced here were made withina few minutes. Unlike most snapshots they aren't recording a special event like a birthday or graduation, but Muir has managed to make each image seem like an important moment to remember. Through careful consideration of the quality of light, the attention to simple and tender gestures, and years of practice, Muir creates icons of youthful innocence and family bonds from the most ordinary of afternoons.

He printed these pictures during his 2002 residency, and until I looked at the date on the back of the pictures, I had not realized that they were taken in 1976. In documenting his family and preserving their collective memories, Muir has described a universal point in time in the life of just about any family, just as much as he has remembered a specific moment in the life of his brother's family.

With the elegant framing of a precise eye and the informed memory of a life recalled in full, Doug Muir has moved back and forth between east and west, but has never left his emotional home of Central New York. Yet, he has managed to allow his family the opportunity to represent the memories we might find in our own family recollections.

Doug Muir lives in Mill Valley, CA, and participated in Light Work's Artist-in-Residence program for the second time in September 2002.