Alessandra Sanguinetti
Revolver from the series The Adventures of Guille and Belinda and the Enigmatic Meaning of their Dreams, 2002 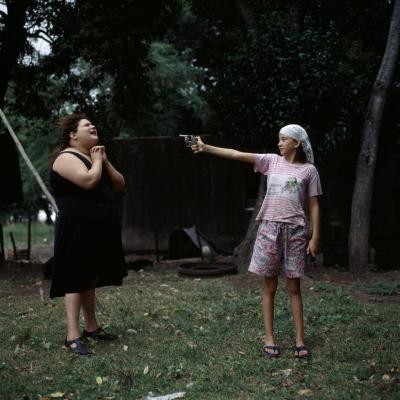 Alessandra Sanguinetti has exhibited her work internationally and has won numerous prizes and awards for her photography, including: Guggenheim Fellowship 2000; National Fund for the Arts, Argentina; Buenos Aires Art Biennial, Argentina; and First Prize, National Hall for the Arts, Argentina. Her work is included in the permanent collections of the Museum of Modern Art, New York, NY; Janet Borden Gallery, New York, NY; and the Museum of Modern Art, Buenos Aires. She participated in Light Work’s Artist-in-Residence program from April 15 to May 15, 2002.

In the remote farmlands near Buenos Aires, Argentina, Alessandra Sanguinetti produced a series of photographs entitled 'On the Sixth Day' that centered on the symbiotic relationship between the farmers, their animals, and the land. While working on this series she first met Guille and Belinda whose families lived and worked on these farms. The two cousins were ten and nine years old when Sanguinetti began to photograph them. Sanguinetti sought to portray the psychological and physical transformations of these girls as they matured into adults. As opposed to a more traditional documentary narrative of these two girls growing up in this rural environment, Sanguinetti instead focused on the desires and dreams of their active imaginations. Sanguinetti writes, “I have attempted to interpret the ending of their childhood by entering their imaginary spaces. The time when their dreams, fantasies, and fears fuse seamlessly with real day-to-day life are ending, and the photographs I have made intend to crystallize this rapidly disappearing very personal and free space.” The resulting series of images, presented here under the title The Adventures of Guille and Belinda and the Enigmatic Meaning of Their Dreams, represents not only an elaborate collaboration between photographer and subject but an intimate relationship cultivated over a five-year period.

Initially Sanguinetti photographed with little intervention as Guille and Belinda played. As the two girls became more comfortable in front of the camera their improvisations became more involved and performances more inventive. Sanguinetti worked closely with them, helping to translate their ideas into images by directing their improvisations as they represented their perceptions of themselves. Through this activity Guille and Belinda became the stars of their own reality, acting out a plenitude of comedies, dramas, fantasies, and fables. Limited only by their imaginations, they fashioned their own costumes and props using toys and everyday objects and used their homes and the surrounding countryside as a backdrop. In addition to the intricate scenes Guille and Belinda would concoct, Sanguinetti also provided them with books and other materials to inspire them to reinterpret in their own inimitable fashion other literary and visual works.

Sanguinetti writes, “It is by paying attention and giving them a space in which to bring out and perform their private dreams and fears, that one can go into this world that otherwise would have been kept locked to themselves and eventually fade away.” As Guille and Belinda matured so did their dreams and fantasies, becoming less playful and whimsical and more grounded in the practical and the inevitable. Conceiving images of themselves as brides, mothers, and care givers, they began to play the roles they eventually would see themselves assuming.

In 1839 William Henry Fox Talbot coined the phrase “the art of fixing a shadow” to describe his negative- positive photographic process that became the basis of the photographic medium. Since then critics and historians have written at length about the metaphorical role photography plays in preserving the past and halting the fleeting moment. Childhood is a very brief period of personal development and discovery, perhaps even more so for Guille and Belinda where the onset of adulthood comes at an early age. The enigmatic dreams and fantasies from the fertile imaginations of Guille and Belinda might have gone unobserved if not for Sanguinetti’s efforts. Through this archive of images, which are as inexplicable as the imaginations that choreographed their content, this fleeting shadow of youth is preserved.

The animal has secrets which, unlike the secrets of caves, mountains, seas, are specifically addressed to man.

Alessandra Sanguinetti has been unfolding a tale of animals and humans, and of their interaction and dependence. Set in the countryside within the province of Buenos Aires is an area known as Partido de Guido. Since 1996, she has been photographing this fragile terrain where the lives of theanimals and the subsistence farmers share a practical and ritual space. The scenes are by local roadsides, fields and nearby woods where the farmers live and work, often within the property lines of the larger landowner.

Chickens, ducks, horses, pigs, geese, dogs, cows, lambs, cats, and rabbits populate these images. We see them as subjects caught in a dance of life and death, and at the service of those who raise and sacrifice them for food, or modest income. This is a countryside where past meets present, and where the relationship between the everyday and the mythical can be unveiled by careful and empathetic observation.

In describing this work Sanguinetti has said, 'This project interprets the people and animals inhabiting the Pampas, their relationship with each other and the land. In the rural farmland of Argentina, this relationship is part of everyday life. Small and open land farming, unlike intensive and factory farming, has resulted in a language of traditions that persists over the years, where the cycle of life and death is present every day, from dawn to dusk.'

It is a mark of fables to endow animals with human qualities. Real and imaginary relations with animals disclose social conditions while offering messages or promises. Our memories include domestic pets that are 'family,' and the acts of heroism, gentleness, fear or cunning that each animal story embodies. While we live in parallel universes, in these images animals and humans double for each other. The animals stand (and fall) for us, and their significance derives from the ignorance of what has or will happen to them.

Sanguinetti's photographs make visible a dialectic of transcription and invention. Her work embraces the contemporary circumstances of documentary practice. It is committed to, but not restrained by, an obligation to represent truth. She discloses situations that invite the viewer to confirm the simultaneous appearance of natural, social, and symbolic phenomena.

The pictures of death and carcasses interrupt the sentimental imagination with a psychic violence, an unblinking acceptance that questions our position in the cycle. Many of the images are taken from the vantage point of the animals, placing the viewer up-close amongst them. Sanguinetti is acutely aware of the gaze of the animals, and how their looking at us is at once plaintive and wary. This interplay between scene and gaze can be haunting and unsettling. We are brought closer to the transformation from living beings to material substance.

Sanguinetti states, 'To portray an animal is to name it. Once named it acquires a new life, and then, is spared death. Each sacrifice gives us back a disturbing image of the border we cross when we end a life, and what it means to turn another living creature into a source of food. It is possible that by exploring the fine line that separates us from what we rule, we may reach a better understanding of our own nature.'

Returning over time to the surroundings of the farmhouse, the nearby lands and the sites of daily labor, the photographs indirectly chart a path to our notion of origin, home. Allegories of modern, post-industrial, urban society are silently thrown into relief. The images allow us to consider the implications of being seen by the animals as we look upon them. They provide the animals and the inhabitants with something their individual lives could not offer, that we remember them.

Alessandra Sanguinetti divides her time between Buenos Aires and New York, NY. She participated in Light Work's Artist-in-Residence program from April 15 to May 15, 2002.

Robert Blake chairs the General Studies Program at the International Center of Photography in New York. He is co-founder of the performance group, Hybridaxe, produces photographic and video documentaries, and writes frequently on contemporary photography and art.
A Just Image