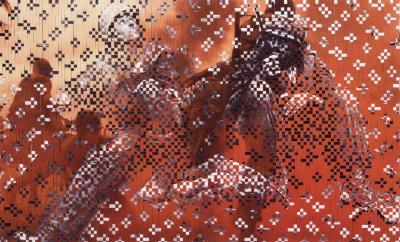 Dinh Q. Lê lives in Ho Chi Minh City, Vietnam. Dinh’s work has been exhibited worldwide in solo and group exhibitions and biennials including the 2008 Singapore Biennale and the 2006 Gwangju Biennial in South Korea. He is the co-founder of the Vietnam Art Foundation (VNAF), a Los Angeles–based organization that supports Vietnamese artists and promotes artistic exchange between cultural workers from Vietnam and around the world. Le is represented by Shoshana Wayne Gallery in Santa Monica, California, and Elizabeth Leach Gallery in Portland, Oregon. He participated in Light Work’s Artist-in-Residence program in April 2000.

Over twenty-five years have passed since American soldiers were pulled out of the conflict in Southeast Asia known by the Americans as the Vietnam War and referred to as the American War by the Vietnamese. On a daily basis the war was brought into America's living rooms via the evening news. During this period Hollywood steered away from direct depictions of the conflict in Vietnam, with the exception of the 1968 film The Green Berets starring John Wayne, which was not unlike the propaganda films Wayne starred in during World War II. Endorsed by the Johnson administration, The Green Berets was a calculated effort to portray America's involvement in the conflict as a necessary safeguard against the spread of communism. It would not be until several years later that films such as Michael Cimino's The Deer Hunter (1978) and Francis Ford Coppola's Apocalypse Now (1979) would set the tone for a different reading of the war where the emotional and psychological conflicts of the characters overshadowed the conflict in the jungle. Fueled by critical acclaim and box office success, numerous Vietnam-themed films would follow into the next decade such as, Platoon (1986), Hamburger Hill (1987), Hanoi Hilton (1987), Born on the Fourth of July (1989), Casualties of War (1989), Full Metal Jacket (1987), and so on. In H. Bruce Franklin's book Vietnam and Other American Fantasies, the author suggests that it was Hollywood that did considerably more harm than the U.S. government in manipulating the perception of the war in Vietnam.

Hollywood would use the backdrop of the Vietnam War to tell many stories--tales of adversity, courage, morality, and immorality. While these films would attempt to alter our perceptions of the war, they remained stories about Americans and rarely examined the perspective of the Vietnamese people whose lives were most affected by this conflict.

Artist Dinh Q. Le was born in Vietnam near the Cambodian border in 1968 during the height of the Vietnam War. In 1979, the same year that Vietnam invaded Cambodia, Le's family escaped Vietnam to Thailand, and eventually settled in California. Le attended college at U.C. Santa Barbara where he received a B.A. in fine arts in 1989, and later an M.F.A. in photography from the School of Visual Arts in New York in 1992. Looking back to a class he attended at Santa Barbara Le recalls, 'I was taking a class with Walter Capps, which focused on the American side [of the war]. I think we spent two days talking about the Vietnamese and the rest of the ten weeks talking about how much the soldiers suffered. I was getting so frustrated that I started making political posters listing the casualties and suffering from both sides.' 1 From this experience Le recognized that there were other stories which needed to be told, and the subject of the war and the experiences of his childhood would be a theme that would resurface many times in his work.

As a graduate student in New York, Le began to produce his first photo weavings by cutting his photographs into small strips and then merging them into a single work. As a child Le first learned how to weave from his aunt who was a grass mat weaver. These early photo weavings combined religious images from Eastern and Western cultures. In a later series of work entitled Splendour and Darkness, Le weaves together images of Khmer Rouge victims with images of the Cambodian temples at Angkor Wat. In this series the artist positions the viewer between images of sublime beauty and profound horror.

In his most recent series of weavings entitled Persistence of Memory, Le combines actual images from the Vietnam War with stills from popular Hollywood movies. The images from Hollywood's interpretation of the Vietnam War are interwoven with images from the war taken from newspapers, books, and historical archives. While Hollywood film makers would use many of these same images as a blueprint, their stylized representations of the war would stretch from the hyper-real to the surreal, producing a new kind of memory which Le would suggest is 'neither fact nor fiction.' In this series Le demonstrates how these images, like the events they are associated with, vie for dominance and suggest how easily fiction supplants memory.