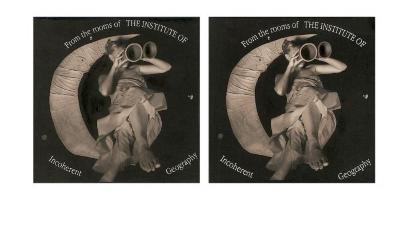 For a more recent CV or bio please visit the artist's website, www.rebeccahackemann.com/

Offered here are eight observations that, like Rebecca Hackemann's boxes--or 'optical sculptures' as the artist calls her works from her 2002 residency at Light Work--can be approached individually or read successively,

Lying alongside the works rather than laying claim to them, the observations foreground this central motif, The construction of a view, its counterpart, and the distension of the pair in a chain of variations. As the fluttering wings depicted in The Independent Wing! suggest, movement around Hackemann's works is crucial. Privileging no single viewpoint, they also refuse a single account.

Evenly spaced and wall-mounted, her works resemble minimalist objects. Their horizontal span accentuates the architectural frame, while the matte white surfaces subtly register the immediacies of light. Yet lenses embedded in their sides open onto stereoscopic images. Just as the pregnant angel in The Revolt of the Angels is both mother and child, container and contained, the sculptures cater to two viewing distances--far and near--alternately bleeding into their context or presenting private, interior worlds.

Simultaneously and respectively channeling each eye towards slightly different photographs, the stereoscope eliminates the single viewpoint assured by monocular perspective. As Jonathan Crary has noted, the stereo image offers 'an assemblage of local zones of three-dimensionality [that] never coalesce into a homogeneous field.' Visually fragmented, the resulting composite's effect is theatrical. Indeed, early Wheatstone stereoscopes employed angled mirrors to reflect photographs held parallel to the line of vision--mirrors to which The Progress appropriately adds a crystalline cloud of smoke.

In lodging vision within the subject, the stereoscope disengages observer from object of vision. Similarly, while the female figure in The Institute of Incoherent Geography clasps a double-lensed apparatus to her eyes, apparently mirroring the stereoscopic observer, her sightline, in fact, pitches to the upper left. Fracturing monocular perspective's equation of eye and vanishing point, the offset axis voids the mutually affirmative reciprocity that once bound subject and object together in an immobile universe, heralding instead a geography that, as the title suggests, is insistently incoherent.

If Hackemann's stereoscopic images undermine the fixity of monocular perspective, the collective arrangement of the boxes simultaneously dismantles the disembodied eye of modernism. Not only reminiscent of minimalism's incorporation of the viewer's bodily movement, the ambient sound generated by other viewers recalls the approaching footsteps that interrupt Sartre's visual mastery through a keyhole and underscore his corporeality in The Look. Indeed, The Unbearable Lightness of Being--An Intellectual conjures less the lightness of the body distilled to its pure optical faculty than its inescapable heft.

Hackemann's concomitant reference to stereoscopy and minimalism is not accidental. Just as the former places the viewing subject in a fluid world of ceaselessly circulating commodities, so the latter replaces the art object with total design, reflecting the rapacious expansion of capitalism. In this regard, The Turkey, depicting a quasi-anthropological bird surrounded by theatrical props, is less disarmingly fictional than disturbingly portentous, describing as it does an objectified subject within a totally controlled environment.

Presenting two exemplars of corporate capitalism, The HuMans elaborates this cautionary tale. Despite their upright bearing, the suited figures are headless, devoid of visual and linguistic abilities alike--the defining features of the human. In contrast, Hackemann's works comprise precisely a combination of image and text. Indeed, the caption here specifically elaborates the centrality of language, 'The reason they never mastered conversation wasn't because humans were too complex, but because they were so simple.'

Hackemann draws from early nineteenth century physiology to late twentieth century art. With systematic consistency, the elements of her works demonstrate a commitment to maintaining multiple viewpoints--a commitment that is not merely theoretical, but has practical political consequences too. As the replacement of the notes in the first bar of The Star-Spangled Banner by blindfolded heads in Oh, say! Can you see? suggests this project is perhaps now more urgent than ever.

Rebecca Hackemann lives in New York, NY, and participated in Light Work's Artist-in-Residence program in July 2002. Her work can be viewed at http://rebeccahackemann.com/.

Christopher K. Ho is a curator and art historian who divides his time between New York, NY and Providence, RI where he teaches at the Rhode Island School of Design.