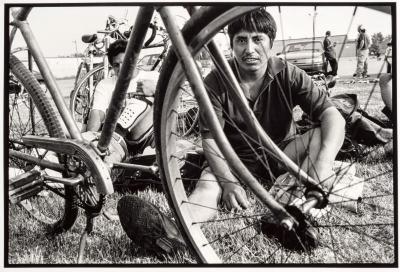 In preparing Laura Cano's work for publication we asked Claudio Batista, a member of our student staff, to translate the titles of her photographs which Cano had written in Spanish. After seeing the list of titles Claudio wasn't sure about a few translations so we showed him the photographs to help answer his questions. When he looked at the first photograph we handed him that showed a group of farm workers carrying baskets through a field he immediately responded ,'Oh, this is in Mexico' When we told him the photograph was taken this past summer about 50 miles north of Syracuse, he was as surprised as if we had told him it was snowing in the Dominican Republic; where he was born and raised. Claudio is a baseball fan and a few of his childhood friends have played on the Syracuse Chiefs, a minor league farm team. Although he is studying International Relations at Syracuse University, if he had his wish he would be playing baseball for the New York Yankees.

This scenario illustrates a few things about presumptions and perceptions. Claudio could easily understand and anticipate Dominican's playing baseball for the Syracuse Chiefs, but was surprised to learn that farm workers from Mexico and Central America work the fields in Upstate New York. We presumed that because Claudio speaks Spanish he would know everything about other Spanish speaking cultures. Presumptions and perceptions about culture and class are two of the most divisive issues of our time. In the photographs of Laura Cano, and the circuitous route that brought her to make them, our perceptions and presumptions of culture and class are stretched even further within the context of how our world culture is changing and how in many ways it remains the same.

In 1989 when Laura Cano was visiting her sister who lives in Utica, NY she met Sylvia de Swaan, a photographer and director of Sculpture Space, an arts organization in Utica. Sylvia de Swaan had immigrated to the United States from Eastern Europe at an early age, and as an adult spent 10 years in Mexico. Soon after they met de Swaan suggested that Cano apply to our Artist-in-Residence program, and in the summer of 1989 Cano began the first of her two residencies at Light Work. As a Visiting Artist this past summer Cano continued to work on a series she began in 1989 photographing Mexican, Mexican American, and Central American farm workers who are brought to Central New York each summer to work the fields and orchards along the shore of Lake Ontario. Cano was trained as a photo-journalist and the images from this series provide us with descriptions of events that lead us to many questions.

In the photograph titled Los Oaxacos, are the young men fighting or are they playing? Are the workers being offered coveted jobs in an expanding global marketplace, or are they being exploited for cheap labor? Are the cultural values of the workers being contaminated by an American consumer culture, or do the two exist comfortably together? Does Cano's position as a female Mexican photographer, with the ability to travel freely in the United States, point to progress, or underscore the division of social class within Mexico? Cano's photographs are simple and elegant, and at times ambiguous. We are hard pressed to discern her point of view, but we know she has gained access to the workers lives and pursued the project for many years. As she resists interpretation in favor of description, our attention becomes fixed on the questions her photographs raise about how our world is changing and how it is remaining the same.

Jeffrey Hoone (c)1995.
Laura Cano, the second youngest of six Mexican brothers and sisters, knows what it is like to be trampled on. When she was a toddler, her place in the family car was on the passenger side footwell of the car. It was not that her parents were cruel, there just simply was not enough space for eight people in a 1970s Plymouth Valiant.

Being young and happy-go-lucky, the indignity of sitting there never crossed her mind until years later. Looking back now older and wiser, being trampled on appears tobe a reoccurring issue in her life, whether the culprits be companies, men, or even her own Mexican government and institutions.

In this series, Cano portrays Eva Bailon de la Cruz, a woman who could very well be a candidate for the most trampled-on woman in all of Mexico. In reality, she is only one of the millions of Mexican women whose lives are filled with sorrowful stories. Eva's life is a catalogue of calamities: unknown father, twice married, twice divorced, four children, death of a child, and loss of an eye through medical ineptness.

Eva is only thirty-two years old, but her torrid experiences in such a short time span have molded her into a woman who, above all, fights for her rights as a woman, as a mother, as a worker, and as a citizen of a country where the hospitals and medical staff have failed her. 'They are rights that you have to defend to give them their due worth. It does not matter how strong the enemy is,' Eva says, 'If you are afraid, you have lost.'

Cano admires women like Eva Bailon de la Cruz because although they are downtrodden, they are not defeated. She spent several weeks traveling throughout Mexican cities housing maquilas. Maquilas are assembly factories that assemble and manufacture everything from electronics to clothes. They pay low wages in sweat-shop conditions, and are run by ruthless managers who demand pregnancy tests before they hire women. It is in these cities that Cano met women such as Eva, women desperate to make enough money to feed and clothe their children, thus becoming a laborer in these factories.

Cano met Eva in the border city of Tijuana, and received Eva's permission to photograph her going about her daily duties and chores. During their conversations, Cano was stunned to hear how thoUnited Statesnds of 'maquila' women work and bring up their families alone. The gaping absence of husbands, boyfriends, or lovers who have fathered children is a void these women have to fill. There is a cultural absence of men. Many Mexican women used to be badly treated by their partners, and now many women, like Eva, have more independence. They end up taking full control of the children and home. Cano says 'I've tried to capture images that reflect the force with which they work and fight to change the way in which their mothers lived.'

Although Eva is has no material wealth and lives in meager surroundings, an unpainted house with only an outhouse to serve as a restroom, Cano's photographs make it evident that she is a dignified individual. She takes the time to look after her home and her children, as well as herself. Her home is filled with family warmth and happiness, and her children grow up smiling and knowing they are truly loved. In certain portraits, Eva also shows a determination that borders on revenge--perhaps the source of her fighting spirit.

Laura Cano believes the maquilas--aside from their labor exploitations--have given women a new role in Mexican society and industry, partly because of the independence they offer, and the chance to walk away from abusive husbands or partners.

Of her work, Cano says, 'It was, and is, important to document the lives of these women. Maquilas have changed the role of the Mexican woman. They are now not just the subordinates of the typical macho male. Now they do double the work, both in the factory and in their homes, but to a certain degree [they are] free.'

Chris Aspin lives in Mexico City, and has spent the past ten years living and working as a journalist in Latin America.
A Just Image