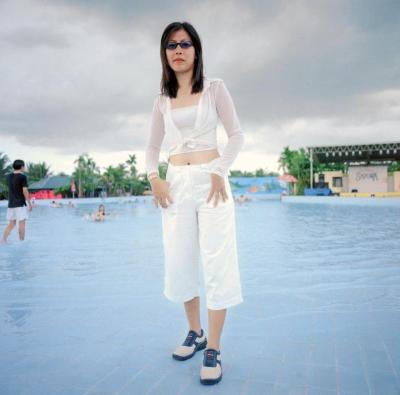 Howard Henry Chen was born in Saigon, Viet Nam in 1972 and left for the United States with his family in 1975, a few weeks before the tanks rolled in.

He studied photography at the Center for Documentary Studies at Duke University, and received his MFA from Columbia College in 2006. Chen was awarded the first Fulbright fellowship given in photography to Viet Nam in 1999, and has spent over a decade shuttling back and forth pursuing his photographic work. His most recent exhibit was at The Museum of Contemporary Photography in Chicago.

"I spent 2000 living and photographing in Vietnam on a Fulbright Scholarship. It was a heady year to be there as an American, especially as a Vietnamese American who was born there, but grew up in the United States. The twenty-fifth anniversary of the end of the Vietnam War, quickly thawing relations between Washington and Hanoi, and President Clinton's historic trip to the country were just some of the events that brought Vietnam back into world headlines once again.

As a documentary photographer working in Vietnam, I witnessed firsthand the long-term effects of the war, changing social and political sensibilities, and the reach of economic and cultural globalism. However, I was not interested in making news pictures of victims of Agent Orange, homeless street kids, or middle-aged veterans returning to old battlefields. I wanted to make photographs that could balance the frenetic, news-and-headline driven images that Americans are used to.

I left Vietnam at age three, and 2000 was the first time I returned to the country of my birth after living twenty-five years of an American life. As a "Vietnamerican," I wanted to create a new set of pictures that could sit somewhere between the images of the Vietnam to which the world has grown accustomed, and images creating a new visual grammar with which we can talk about Vietnam.

What do the words "Vietnam" and "photography" usually connote? For many Americans, it's a photograph of a monk afire in protest on a crowded Saigon street, or a naked nine year old Vietnamese girl burned by napalm, or the image of a South Vietnamese Army colonel executing his Viet Cong prisoner with a bullet to the head, in broad daylight. Today that nine year old girl is now a United Nations Goodwill Ambassador, and that army colonel quietly owns a pizza restaurant in the suburbs near Washington, D.C. A monk walking in the street doesn't portend self-immolation, only meditation and alms seeking. I also wanted to produce pictures that could give an alternate, contrarian view of the Vietnam that is so loved by the popular press today-a newly-minted country awash in Pepsi billboards, mobile phones, Nike factories, and discos, versus an Orientalist's fantasy of smiling farmers in conical hats leading water buffalo through verdant rice paddies.

I think we, as Americans, are accustomed to thinking about Vietnam as a series of anniversaries frozen in time: the anniversary of this battle or that military offensive, or this particular protest or that incident of violence. I learned the Vietnamese have moved on with their lives in a way that continually amazed and moved me. It was a quality of radiant stillness that I saw and photographed."


With this clear and succinct statement Howard Henry Chen provides an entrée into his work that is both personally illuminating and universally enlightening. For a generation of citizens around the world, Vietnam is a place in history, and a site of conflict, that will always be remembered through many of the seminal photographs he describes in his statement.

Perhaps for subsequent generations that now include individuals the same age as Chen, those images will be frozen as historical markers as other less dramatic images take their place, or at least stand in striking contrast to the events of the past. The power of Chen's photographs rely on contrast to reveal their subtlety and grace. Most of the photographs that describe the war in Vietnam are black-and-white images formed by the familiar rectangle of a journalist's 35mm camera. Chen's choice of a square medium format captures a range of detail, a quality of light, and range of color so completely different from what has been depicted before that it is hard to imagine it is the same place at all.

But Chen is not a photojournalist, and surely there is another reality about current daily life in Vietnam. As an artist he was attracted to how many people in Vietnam have moved on with their lives since the war, and the images in this series bring that movement clearly to life. His portraits are mainly of individuals who are about his age who were born just at the end, or shortly after, the war in Vietnam was declared over. These portraits help to further personalize the work, and at the same time, subtly signal hope for a new generation where a different reality can be crafted for a place that has been locked for so long in the images of an unforgettable time.