Osamu James Nakagawa
Rain, from the series 'Ma, between the past', 2003 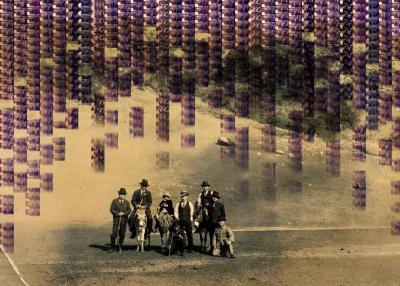 Osamu James Nakagawa was born in New York City; raised in Tokyo, Japan and returned to Houston, Texas at the age of 15. He received a Master of Fine Arts from the University of Houston in 1993 He is the Ruth N. Halls Professor of Art at Indiana University and a recipient of the 2009 Guggenheim Fellowship and 2010 Higashikawa A New Photographer of the Year, and 2015 Sagamihara Photographer of the Year in Japan. Nakagawa's work is shown internationally and his monograph GAMA Caves was published by Akaaka Art Publishing in January 2014.

The title of the series is Kai, which translated means 'cycle.' Among the images in the series is Kai, Ninomiya, Japan, Autumn 1998, which depicts a large framed portrait of his father leaning against his wife's legs as she stands in an empty, watery landscape holding their daughter. Three generations are portrayed, but his father is present only in the frozen memory of the formal portrait, chosen by his family to be shown at his funeral. He similarly addresses generations in an image of his daughter playing, while his shadow is on the wall to her left and his wife's profile is projected on the wall to her right. In Morning Light, Bloomington, Indiana, Spring 1999, his daughter plays happily in the confines of this protective bracket. For the moment, she prefers a camera to the zoo of stuffed animals at her feet. Eventually, he and his wife will fade away, becoming shadows themselves. One hopes that the family cycle will continue to evolve with his children's children. Facing the mortality of a parent forces one to consider their own mortality.

Born in New York City in 1962, Nakagawa was seven months old when his Japanese-born parents took him and his older brother back to Japan. Fifteen years later, the family returned to the United States where he attended high school in Houston. His parents subsequently returned to Japan while he stayed in the United States to continue his undergraduate studies at the University of St. Thomas and graduate studies at the University of Houston. He returns to Japan periodically, some visits lasting up to a year.

Having been first exposed to photography through the esteemed work of his uncle, Takayuki Ogawa, Nakagawa has, from the beginning of his education, blended interests in cameras, computers, and the disparities of his dual cultural upbringing. As a recent press release stated, 'The cross-cultural experience of being neither a stranger, nor a native, of either Japan or America informs the content of his artwork to a large extent.'

Nakagawa's earlier work, the Billboard series, imposes images of minority cultures in the United States on billboards and drive-in movie screens. In the most widely reproduced image from the series, a face in a gas mask looms over an urban roadside. This image brings a chilling relevance as threats of war and terrorism are woven more tightly into the fabric of American life.

Using materials and images inherited from his father, Nakagawa is shifting toward the exploration of his Japanese roots, as well as to the variances in documented and remembered pasts. In light of the cross-cultural tensions that are constant in his life, he reconsiders his past, as well as the past of the two nations of his heritage. Ever since U.S. Navy Commodore Perry's black ships sailed into Nagasaki's harbor in 1853, forcing Japan to open itself to foreigners after over 200 years of isolation, U.S.-Japanese relations have coexisted in a blend of conflict and productivity.

Nakagawa's new series is titled Ma-between the past. The translated meaning of Ma is 'that which is between, in the gap.' In this series, photographs taken by his father and maternal and paternal grandfathers, trigger Nakagawa's memories of the past. He then combines their images with photographs he took in Japan and the United States. With the aid of computer manipulation they collapse time and place, much as our memories often unite people and places that never coexisted in the real world. The images are between cultures, between generations, and between time.

A glance at Nakagawa's work may suggest that the images are documentary in nature. But whether an image is 'straight' or computer enhanced, on more careful study, the straight narrative approach shifts to a less easily explained layered meaning. He combines people, objects, and landscapes more like a poet than an essayist. Just as he straddles two cultures, his images are neither clear nor certain in fecund ways.

Osamu James Nakagawa lives in Bloomington, IN, and participated in Light Work's Artist-in-Residence program in June 2002. His images can be viewed at http://osamujamesnakagawa.com/.

Anne Wilkes Tucker lives in Texas, and is the Gus and Lydall Wortham Curator of Photography at the Museum of Fine Arts in Houston.
Un/Common Threads

Laura A. Guth is an artist and educator. She lives in Manlius, NY.
A Just Image