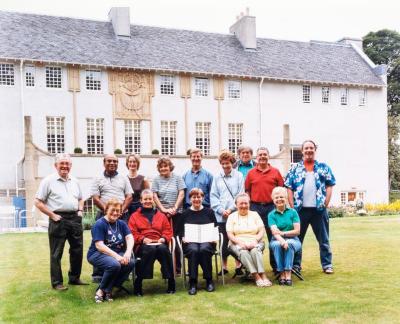 For a more recent CV or bio please visit the artist's website, www.yokorabbit.com

Yoko Kanayama was born and raised in Kyoto, Japan. After living in England for three years in the late 80s, she moved to the U.S. in 1991. She now lives and works in Los Angeles. She holds a BFA in Photography from Otis Collage of Art and Design, and a MFA in Photography from California Institute of the Arts. Her work has been exhibited in the U.S. as well as the U.K and Spain. She participated in Light Work’s Artist-in-Residence program in September 2002.

We live in an age of illustration. Today, films are representations of books, paintings are illustrations for stories, and stories, themselves, serve as transparent expressions of inner life. There is, no doubt, something healthy in this. The old modernist idea that one can concentrate purely upon the means of expression, the form of a particular art, quickly becomes oppressive.

And yet, one also wants to shout to the makers of The Lord of the Rings or the author of the latest autobiographical confession piece featured on The Oprah Winfrey Show, “That’s not it!” More, given the dominance of illustration today, the strange silence (economic, technological, critical) that meets any work refusing reduction to it, one must feel that there’s something suspect about, well, just illustrating; that there’s something politically resistant in the refusal to represent.

Yoko Kanayama, who originates from Kyoto, Japan whence she departed first to London and then to L.A. in 1987, writes that her work is “not polemical,” and that is certainly true. Whether it’s her background in modern painting with its concern for the material support of any visual representation, or her communicational alienation as a transplanted Japanese woman, the most consistent quality of her photography is the way it confronts the viewer with ambiguity, mystery, and the impossibility of representational closure. Given a recent turn in art toward a kind of polemicism that’s often carelessly labeled “political,” it’s important to begin from Kanayama’s self-description. However, we must contemplate the profound irony that such a refusal of polemic may be, today, the only genuinely political gesture left to the artist.

Indeed, the irony involved here is not external to Kanayama’s work, but invades it at every level. She carries on the tradition of artistic protest, what an earlier generation of scholars associated with the “negativity” of the historical avant-gardes, precisely to the extent that she remains true to a path of exploration as far as possible from any such provocation. One sees this in her choice of photography as her medium.

The “objectivity” of an art form historically associated with documentary opens the possibility for moving beyond art as simple “self-expression.” Yet, and here the return of that pivotal irony, this very reason for utilizing photography also demands a refusal of the photograph’s own tendency toward illustration, toward newspaper reportage? Thus, we observe Kanayama’s struggle against the inevitable documentary literalness or obviousness of photography.

Kanayama is intensely aware of Japanese minimalism as a communicative aesthetic. She writes, “Because of the monocultural condition of Japan, it is possible for Japanese [people] to communicate with each other using an extraordinary economy of expression. A single word, gesture, or character can suggest many senses.” Above all, it is to this aesthetic value of the Japanese language to which she credits her love of riddle and mystery. But the same material expression that opens the possibility of giving open meaning, also threatens to close it down; the simple gesture creating a riddle crafts an exquisite object, apparently closed to messy interpretive meddling in the silence of its perfection. Thus, Kanayama also challenges the craftsperson in herself through the use of collages of text and image. The silence of her exquisite images is overlaid with the chatter of non-illustrative text, as in the series Life is Elsewhere, where calligraphic traditionalism is challenged by spatial separation and logical disjunction of text and image.

Here emerges a logic of sorts—to make a work of art open itself to the voices of its interlocutors, submit its silence to the babble of text. To make a photograph more than an illustration for text, twist the text, the “caption,” away from the narrative of the image. This allows the objectivity of the image to work as both a gift to, and demand of, the viewer. The viewer will then be called upon to construct the “life” of the work through her interpretive work in moving between image and text. As she writes, “…my interest is to put together fragments of image and text as puzzle pieces to provoke the viewer to create a bigger picture.” The result is Yoko Kanayama’s remarkable and prolonged investigation of relationships between photographic image and text depicted in a number of series from recent years, Life is Elsewhere Parts 1 & 2 (1998-present), Ghost (2000), ten foot square house (1999), and The Correspondence (1998).

Tom Brockelman is the chair of the Department of Philosophy at Lemoyne College in Syracuse, NY. He is the author of The Frame and the Mirror: On College and the Post-Modern.